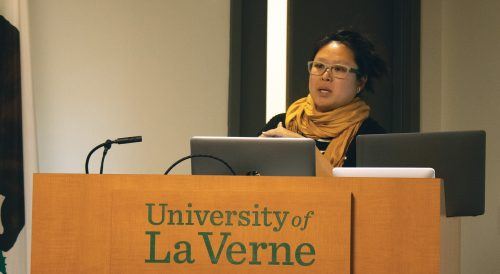 Gail Tang, associate professor of mathematics, shared her National Science Foundation funded research on improving creativity in college math courses as well as her time teaching in Mandalay as a Fulbright Scholar on Tuesday in the Executive Board Room. / photo by David Gonzalez

Gail Tang, associate professor of mathematics, discussed her work in Southeast Asia as a Fulbright Scholar and her research on shifting pedagogical beliefs on Tuesday in the Executive Board Room.

Tang’s lecture, titled “Went to Burma; Came Back from Myanmar,” was attended by 40 faculty and students.

Tang was part of a team from various universities, including assistant professor of mathematics, Emily Cilli-Turner, that received a grant titled “Reshaping Mathematical Identity by Valuing Creativity in Calculus” from the National Science Foundation.

“We wanted to show that if we made a creativity in progress rubric for calculus and problem solving, then that would help instructors explicitly value creativity and could help in the confidence, affectual stuff and also in the value in creativity, persisting, taking risks and making connections,” Tang said.

Participating teachers at other universities were tasked with using the creativity in progress rubric to implement and assess four mathematical tasks and to assess two different tasks.
Before participation, failure was seen as a way to foster creativity. A participating professor linked how they teach in class affects the way students approach math. The professor also said time is a reason why they do not do these creative approaches to math.

After the program, it was found that students were beginning to teach each other and that the professors found time to utilize creativity.

Tang said the data from the first cohort of her research is still being analyzed and that cohort two is underway and cohort three is being planned.

Tang, who is the first woman Fulbright Scholar from the University of La Verne to travel abroad, spent time in Mandalay to teach a first year calculus course and a third year math course, using the material from the NSF funded and developed curriculum.

Tang said students in Mandalay start college when they are 16-years-old and faced challenges having a teacher who did not speak their own language, on top of being away from home for the first time.

Tang said she was met with kindness in Mandalay and felt like she was treated like royalty in Mandalay.

She retold a story of her asking for help through charades because of the language barrier.

“I just thought that was such a kindness that you don’t really experience here. There’s no way that someone from Staples is gonna do that,” Tang said.

She said that she learned that there are American centers in other countries and visited the Jefferson Center in Mandalay, which is about increasing awareness of the United States and increasing English proficiency. There she attended English discussions to observe, but was asked to lead a discussion after people found out she spoke fluent English.

Xiaoyan Liu, professor of mathematics, said that it was interesting to hear about the lives of people living in Myanmar, previously known as Burma, and about the history of conflict in Myanmar.

“People are reluctant going, and she gave us insight into Myanmar,” Liu said. “When we actually travel, we find out that the people are actually very nice.”

Liu said she wants to apply Tang’s research to her classroom to get students to be more creative in their problem solving.

Al Clark, professor of humanities, said Tang’s research in increasing student participation and creativity can apply to other disciplines if instructors found ways to apply her methods.

“The point that she strongly made was that there are many ways to get to the same answer, and that there will be many kinds of opinions is an important one,” Clark said. “Secondly, and maybe even more importantly, is that she managed to get teachers in that cohort to get students to talk in class.”