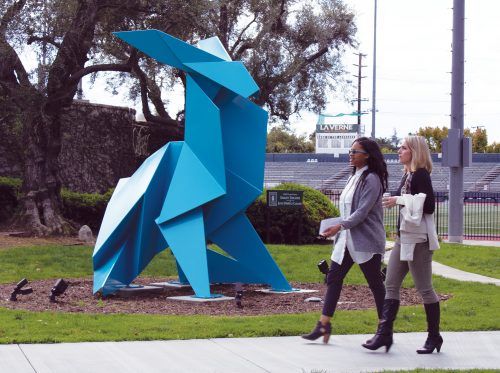 Alexandra Burrel and Shannon Capaldi walk by the origami-inspired sculpture that is called “Rabbit, Sitting” and was created by Los Angeles based artist Hacer and is now permanently lodged at the University Quad, in front of Dailey Theatre. / photo by Liliana Castañeda

“Rabbit, Sitting” is the name of the new permanent sculpture on the University Quad of a turquoise origami rabbit that was purchased by the University of La Verne at an undisclosed amount.

The sculpture is part of a series called “The Chase” created by Los Angeles based artist Gerardo Gomez-Martinez also known as Hacer.

His artist name originated from the Spanish verb that means “to do, to create, or to build.”

Hacer had wanted to keep his Mexican-American identity but did not want to choose a generic last name as his artist’s name so he chose a Spanish word that spoke for itself.

Hacer was introduced to origami when a young lady who volunteered at the foster home in which he grew up came in to tell the story of “Sadako and the Thousand Paper Cranes.”

She taught the children how to create the crane out of origami after reading the story and he soon found out he was skilled at following the folding patterns.

Many kids after that would ask him to make more cranes, he then started adding tweaks and that evolved into different animals and he grew to love the art.

“Just a random rabbit popped out of nowhere, I would understand if it was the school mascot, but a little more context would be helpful,” said Trevor Anderson, sophomore business administration major.

The series called “The Chase” is made up of four sculptures that depict survival between a fox and a rabbit. The first sculpture that the series lined up in is called “Coyote, Stalking” ahead of it is “Rabbit, Sitting” then is “Coyote, Running” and “Rabbit, Running.”

“I wanted the rabbit and coyote to have a different shade of turquoise because they have a symbiotic relationship, it’s not friendly,” said Hacer. “That’s why I use animals because when you separate the human aspect and just get into the relationship of feeling a certain feeling, people can kinda like take themselves out of the equation and relate.”

“‘Rabbit, Sitting” is positioned in a way that allows the sun to touch it all day and reflect its bright color.

The sculpture from afar seems like it is made out of plain colored paper like the origami Hacer used to make in his younger days, but through further inspection one can see that it is made out of steel. Hacer welded sheet metal in the same manner that he would fold paper.

Susan Geffen, assistant professor for undergraduate psychology, recalled passing by often to get to work in the Hoover Building and just noticing the rabbit appear out of nowhere.

“It’s interesting., The color is pretty, it definitely reminds me of origami,” Geffen said. “I think adding little bits of artwork around campus are kinda fun. It’s a fun surprise, especially if you’re new to campus and you just look around like, ‘Oh look, a bunny.’”

The sharp edges imitate paper folds and allow the sculpture to create harsh angles and corners where the metal is welded back or protruding frontward, as well as create more depth and dimension where the shadows are darker than where they may be lighter.

“I think the sculpture does a really great job of showing how diverse our collection is, and how it’s visible on the campus,” Johnson said.