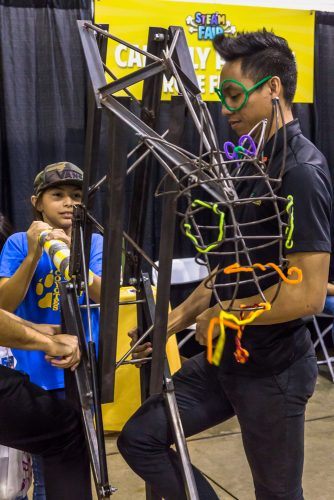 A student from the Cal Poly Pomona Rose Parade booth directs a child during the STEAM Fair last week at the Fairplex in Pomona. The horse mirrors the construction phase of the float used in the parade. The model included wires and hydraulics. / photo by Mya-Lin Lewis

Visitors were captivated by the technology driven booths at the second annual STEAM Fair on Friday and Saturday.

The Fairplex in Pomona welcomed thousands of southern Californians for this free educational community event.

A variety of booths were showcased at the fair, including booths from the Jet Propulsion Laboratory and Diamond Bar High School’s robotics team.

“Kids are pretty excited about space exploration,” Seidel said. “This is the chance to reach an audience that isn’t otherwise entirely connected to NASA.”

Seidel said nothing beats the look on the visitors’ faces when he educates them on the wonders of space exploration.

Cole Kuster, the team’s coach and senior mechanical engineering major at Cal Poly Pomona, worked with the students in January and February to build a robot for the annual FIRST Robotics Competition.

“The kids never see a lot of practical application,” Kuster said. “So it’s just insane for them to see a robot bigger than they are.”

On the other end of the scientific spectrum, Felicia Beardsley, archaeologist and professor of anthropology at the University of La Verne, showcased a booth about the science of dendrochronology, the method of dating tree rings to the exact year they were formed.

“Trees are records and storybooks of the past and the climate in the past,” Beardsley said. “From a tree, you can actually start predicting what we should expect in the future.”

Beardsley said the best part of presenting at STEAM Fair is how mind-blown children and parents get when they date the age of a tree and compare it to their own age.

With thick wings and a sturdy frame, he showed attendees how to make the perfect airplane.

Tammy Roush, director of experiential programming at Fairplex, put together the STEAM Fair to make sure the kids in the community are engaged and excited to learn.

“We did a lot of research before we threw this event,” Roush said. “There are no other events like this in the area. There really is no other public like this on this level.”

Aaron Arellano can be reached at aaron.arellano@laverne.edu. 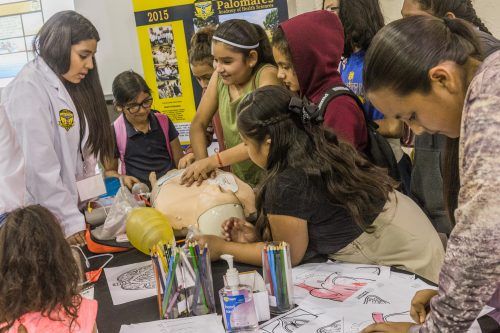 A student from Palomares Academy for Health Sciences booth shows children how to perform CPR on an dummy. The STEAM Fair is in partnership with Cal Poly Pomona in order to get kids interested in science, technology, engineering, arts and math. / photo by Mya-Lin Lewis