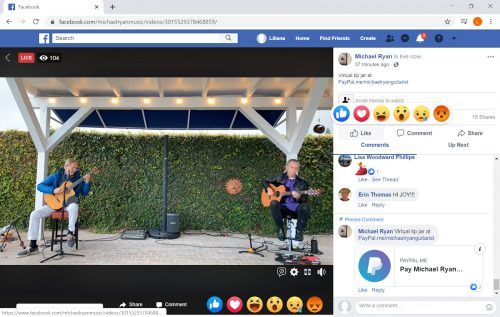 A University of La Verne professor has combined fast-paced flamenco strums with the soothing plucking of classical guitar and created life, energy and community through a Facebook live stream.

Michael Ryan, senior adjunct professor of music, and fellow guitarist Ken Soderlund hosted a livestream through Facebook on April 2. The livestream was in honor of the weekly shows they would have usually performed at Walter’s Restaurant, Bar and Lounge in Claremont every Thursday evening; something they have done for the past five years, alongside another guitarist, Hai Muradian, who was not able to perform in the livestream.

“It restores normalcy in everybody’s lives,” Soderlund said. “Nobody really knows quite what to do, people would usually gather every Thursday night and so we are just trying to keep the tradition moving forward.”

At first glance, the musicians performing so far apart on stage was an unusual sight. It was, however, all in the name of social distancing so they maintained approximately six feet apart while playing, as is recommended by the Centers for Disease Control during this coronavirus pandemic. They performed in a patio under the shade of a veranda, where the sun shined and the birds could be heard chirping.

“When playing for the internet you’re only in front of your phone so it’s like you forget that there’s people listening and you concentrate on what you’re doing more,” Ryan said. “I suppose it’s like people who are on TV a lot, all you have is a camera person a lot of the time, a lot of people are watching but it’s still only the camera.”

The transition from live shows to online shows was fairly simple with virtually no set-up changes from a live show, they said. The only difference was the place and the camera to record the live stream. Both Ryan and Soderlund mentioned the absence of an audience reaction, and they said it made it a bit strange with them being used to immediate responses like clapping from audience members.

Throughout the livestream of 110 spectators Ryan and Soderlund would give insight into what music they were playing. There was a mix of flamenco, Irish folk and classical music, including lesser known songs like “Brazilian Rain” and more popular tunes like Jeff Buckley’s “Hallelujah.”

“Music is an excuse for people to socialize,” said Kevin Pickering, senior marketing major. “Everybody still wants to feel a part of a community even when we are separated by distance or isolation.”

In the comment section of the video there was praise for the music, some thanking the musicians and others just appreciating the sounds of the music as it came. Some described the moment of enjoying a tall glass of wine while listening, and others reminiscent of the food and restaurant in which they would frequently play.

“I’ve noticed that a lot of musicians, like the professors and all, have like a call to community, as corny as that is. Like a, ‘We all have to love each other man, peace and love man. All we have is each other,’ type of thing, you know,” Pickering said.

Jocelyn Cuellar of Azusa said the livestream had a sense of tranquility and peace about it that set a contrast to the fear and panic that many people have been feeling.

“It kind of sounded like a way to just take your mind off of what the heck is happening right now. It felt calming and relaxing,” Cuellar said.

The performance can still be watched on Facebook at any time. There are many other live performances on Michael Ryan’s Facebook page that are partnered with charities like House of Ruth, Inc.

Ryan was also able to raise $949 for the University of La Verne emergency fund on April 11 through a Facebook livestream he held in his living room.