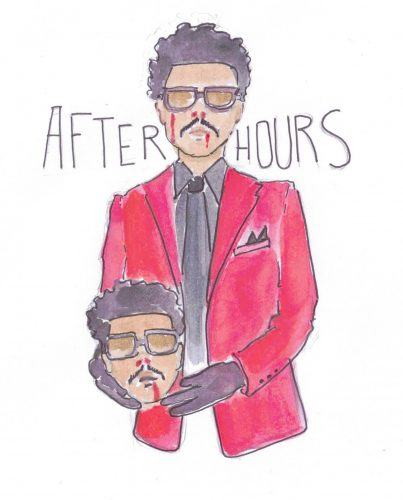 The Weeknd brought back the colorful sounds of 1980s synth in his fourth studio album, “After Hours,” which debuted March 20.

The album follows themes of loneliness and indulgence juxtaposed with today’s fast paced lifestyle of bright lights, quick wealth and fast cars in his music videos.

The music videos for the album all line up to form a storyline of him performing on a stage, then going out to a casino and overindulging in alcohol, gambling and drugs. From there, his night descends into a nightmare of violence and death.

There is a central focus on the bright red color found on his blazer as lights flash uncontrollably making visible his psychotic break, which was induced after licking a frog.

Interestingly yellow, green and red lights flash in narrow hallways almost depicting what is going on inside his head. All the walls seem to be getting narrower, caving in at one point, with fast camera shots panning from scene to scene. Lights appear to represent an escape, or an opportunity to distract from the loneliness he feels. In one scene, The Weeknd is standing in the darkness until he sees the lit arches of the casino’s entrance and his attention is then drawn to the lights, along with the attention of his audience.

The bass lines used throughout the album mostly begin deep, intense and unaligned but then start to mellow out in the background through a consistent beat as the chorus starts, going from uncertainty to clarity in its sound. The whole of the album is a roller coaster slipping in and out of fast paced sounds with an excitable mood at one moment then dropping to a depressed one at another. “Blinding Lights” is a prime example of a manic episode, demonstrating his psychotic high with lyrics like “I’m running out of time” showing his persistence and obsession with drug-fueled violence. The fast tempo of the song mimics an apparent mental breakdown while on psychedelics in the music video.

The album takes a trip between what loneliness is and how it feels. In his song “After Hours,” The Weeknd describes loneliness as a curse, a bad heartbreak and the repercussion of bad actions, while the song “Heartless” only makes loneliness appear as a form of release from relationship pressures and expectations.

The Weeknd’s whispered falsetto and the echoes added in production provides a sound as though balanced between sleep and reality, peace and chaos.

“After Hours” has been felt widely throughout the globe as most everyone is struggling to find comfort and connectedness in a world of social isolation and loneliness. The album dropped in a time where everyone around the globe is searching for a way to not feel so alone in their feelings of isolation and helplessness amid the coronavirus outbreak, allowing for a community to be built around music that brings validity to experiences that many are facing.

Liliana Castaneda can be reached at liliana.castaneda@laverne.edu.