By Campus Times Editorial Board, Danielle De Luna on April 10, 2020 in Editorials, Opinions 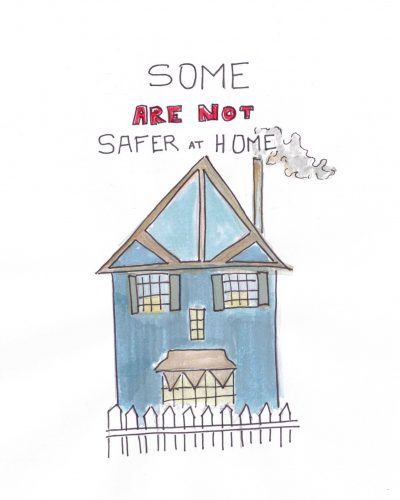 As many cities, states and countries continue to urge their citizens to stay at home during the global coronavirus pandemic there has been a resulting spike in domestic abuse worldwide.

The rate naturally goes up whenever there is a large amount of time spent at home, such as during holidays and vacation time, according to the New York Times. However, now that people are mandated to stay home at all hours of the day, women and men globally are finding themselves stuck with their biggest threat, their abusive partner.

The circumstances that we are all facing today have made it much harder for victims to leave their abusive situations. Because everyone has been advised to stay home, the virus has stripped victims of any chance at escape while their partner is away for the day, something typically done to avoid repercussions and fear in the moment.

All around the world women and men are being abused. In Spain there was an 18% increase in calls within the first two weeks of lockdown compared to the same time span a month earlier, according to the New York Times.

Another story was told in The New York Times about a woman in China who was domestically abused by her husband with her baby in her arms. When the woman finally escaped to the other room she called the police and they documented the report, but nothing was done afterwards. She then called a lawyer and filed for divorce, but with the courts being shut down, her divorce has been postponed and finding a new house during this time has not proven to be a viable option.

Domestic abuse cases are continuing to happen all over the world with little to no help or resources readily available for victims due to the coronavirus.

According to The Guardian, many abusers are using COVID-19 as an excuse for their actions. Abusers are either not letting their victims step foot out of the house at all, or are kicking them out completely if they show any slight sign of being sick. Many hospitals are unable to take these women in because of the amount of COVID-19 cases they are dealing with.

The stay at home orders may have brought upon a new set of challenges for domestic violence victims, but alternative routes for help are still being sought. Hotline resources have not shut down and offer both call and text services, while shelters remain open and are considered essential, with several enforcing coronavirus testing and taking extra cleanliness repercussions.

While in some areas a spike in domestic violence calls have yet to happen, that does not necessarily mean these violent situations are not happening. Victims experiencing abuse may not feel comfortable or safe calling in from the same place they are being abused, with reporting oftentimes leading only to further abuse.

The unfortunate fact of the matter is that because everyone has been ordered to stay at home, there remains no safe place for victims of abuse to run toward. In these cases, victims remain trapped with their abusers in the name of global health, scared to seek help because of the dangers currently present outside of our homes. We, as a society, need to ensure that victims of domestic violence are receiving the help and resources they need.

Letter to the Editor
Music Review: The Weeknd’s bright lights are full of shadows on ‘After Hours’