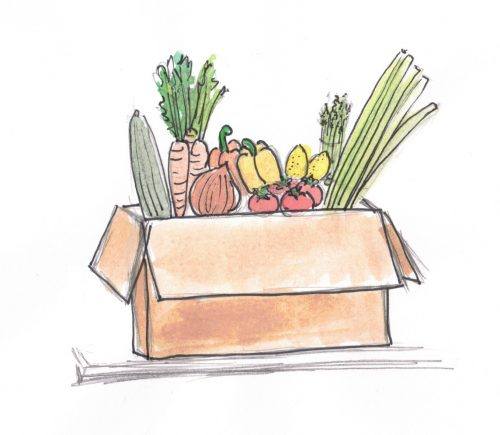 Social distancing mandates in light of the COVID-19 pandemic, has meant most area farmers markets have had to close at least temporarily.

But people still need to eat – and Southern Californians still want fresh local produce. So some local farms have adjusted.

Oscar De León, manager of the Claremont Farmers Market, played a key role in getting the word out that some of the local farmers were willing to deliver to customers’ front doors. De León, also a University of La Verne  alumnus, compiled a list of farms that would deliver, posted it on social media, and the post he said went viral.

“The minute some farmers markets closed, I was worried about the well being of the farmers,” De León said. “So I called each farmer I knew in my network and I asked them who would be willing to deliver?”

Many have since begun offering delivery and pick up sites for local communities to get their farmers market fare.

“Farmers are very innovative, you gotta figure how to make things work and how things can change,” said Phil Noble, owner of Sage Mountain Farms in Anza.

Sage, a regular at the Claremont Farmers Market, also has in place a Community Supported Agriculture label with a wide delivery range, serving more than 20 Southern California cities.

CSA is a system that connects local farmers to their communities by allowing customers to purchase a share of the harvest. Customers can have produce brought to their doors and is also available for pick-up.

“We should really give credit to the people supporting their local farms,” Noble said. “If it wasn’t for them, we’d probably be out of business right now.”

Members sign up for a box that includes in-season produce, that changes, or course with the seasons. This week’s member box includes kale, spinach, salad mix, beets, cilantro, avocados, rainbow chard and other items that bring the heart of nature right to your kitchen. Honey, jam and beef are also available for purchase along with your box of veggies.

“Every CSA I know is full, they can’t take on any more members,” Noble said. “Farmers that are delivering for the first time ever, I would imagine that they’re busy or hope they are.”

Sage does home deliveries for residents within Temecula and Hemet areas for an additional fee along with pick-up locations including Saturday mornings in Claremont.

In Claremont, for example, Sage allows customers to pick up their box order at Shelton Park in Claremont. Pick-up times are according to the customer’s last name in an effort to control the size of the crowd.

Saul Tavares, an Ontario resident, said he enjoyed the convenience of the box especially during this time because it’s difficult to find specific items at his local markets.

“I’m practically driving straight to the farm and getting the best produce they have to offer,” Tavares said. “I bypass all the grocery lines and just have to come and pick up my box. It doesn’t get better than that.”

Delivery set-up is easy through sagemountainfarm.com/csa-box. Members are able to control the amount of produce in their box as well as the delivery frequency when they order.

“People need to have access to good food,” Noble said. “If they can’t get it at a grocery store, why not support a small local farm.”

Amy’s Farm in Ontario does not have a delivery option to their operation, given social distancing recommendations and fewer workers and volunteers because of the pandemic.

“It is increasingly more difficult because we have an increased food demand and production and less laborers,”  said Melissa Castaneda, educational program director and media coordinator for Amy’s Farm.

“We have limited the farm stand store to one family at a time to shop, and ask that all guests wait until the family has completed and exited the store before the next family enters,” Castaneda said.

The farm still welcomes walk-on visitors and their stand remains open Monday through Saturday from 9 a.m. to 5 p.m.

DeLeon, who also manages markets in Riverside County added that he has been able to reopen Riverside markets with strict social distancing and other safety protocols,  Saturday marked the second week his downtown markets ran.

“There’s different feedback from customers, some love the idea of reopening farmers markets, some are not so crazy about the idea for obvious reasons,” DeLeon said.

DeLeon said his Riverside and Moreno Valley markets have had to rely on extra staff to ensure visitors and vendors were keeping a distance of six-feet apart from one another. DeLeon added compartment sinks and hand-wash stations for employees and vendors.

“There’s no sampling allowed. We had to cancel all prepared food,” DeLeon said. “Our markets are farmers only right now.”