Many in the arts and entertainment industries have found creative ways to work while the effects of COVID-19 have left many unemployed and organizations at a loss for what to do to continue their work.

Those at improv-acting enterprise The Second City have adapted their classes and content to an online format, while ensuring their audience and participants have a similar experience to what they would have had in person.

“We immediately started to do what we do best – improvise and figure out what we can do,” said Carrie-Ann Pishnak, Director of Marketing and Associate Producer at The Second City. “Can we do what we do online and how do we transition it? How do we take our curriculum and make that work in a virtual setting? The experience is very specific. When you take an improv class, you become one, there are no stars in improv. You are an ensemble. So when you still feel that when you aren’t in the same room with someone, would you still feel connected?”

As classes began, many realized that the intimacy that improv requires was still palpable in an online format.

“It started to become apparent to us that it was a very intimate platform, and that you could have that shared experience that you had on stage and you really felt like an ensemble,” Pishnak said. “It didn’t feel like you were being sequestered in any way.”

The Second City offers numerous online classes that span a variety of topics, ranging from standard improv to songwriting and dialect/character voice lessons, each accommodating for students’ varying levels of experience. Each class is 90 minutes with up to 16 people that last for six to eight weeks. Eighty percent of classes that existed prior to the pandemic were able to transition to an online format, while the rest were put on hold until the pandemic subsides.

As life in quarantine continued, Pishnak and others at The Second City realized that people now have different everyday stressors to account for such as “Zoom fatigue.” To help combat such stressors, The Second City expanded its drop-in classes by adding topics centered on mental health and well-being.

The Second City has also stayed busy producing new content despite living under lockdown. The first season of The Second City’s show “The Last Show Left on Earth” produced in partnership with Topic, was put together entirely remotely with only one scene shot prior to the lockdown. The show can be found on Topic’s YouTube channel.

“I’m just so impressed with my colleagues and so grateful that I am in this community and am committed to this community because it is the most wonderful, uplifting and just good-hearted ensemble environment,” Pishnak said. “I couldn’t ask for a better place to be during an absolutely uncertain time.”

Others in the performing arts have also had to completely rethink and retool what they do in the age of coronavirus. With many musical acts halted due to social distancing guidelines, the livelihood of many musicians suffered. However many have also found good ways to continue their craft while at home.

Michael Ryan, senior adjunct professor of music at the University of La Verne, has had to adapt his life as a performer.

In addition to the classes he teaches at the University, Ryan also played six live performances a week.

Ryan performed at venues like the Candlelight Pavilion Dinner Theater in Claremont five times a week, as well as every Thursday at Walter’s Restaurant, Bar and Lounge, drawing crowds of hundreds at the former. He would also travel to play in Europe every summer. However, the pandemic has halted his in-person performances and foreseeable travel plans.

“All that has stopped, and my income in that area went pretty quickly too,” Ryan said.

So Ryan had to change up the way he performs. Now, he reaches his audience of thousands through his performances on Facebook Live, all from the comfort of his own backyard, sometimes with the help of a fellow guitarist and flute player. Ryan also performs solo in his living room on Saturday evenings.

“It was strange to get used to because I would play something quite difficult, finish and then look up at the camera, and there’s nothing,” Ryan said. “It’s much easier when I’m playing with the other guys because then we have each other to play off of.”

But Ryan says his efforts have been met with nothing but praise, with one of his performances of “The Wayfaring Stranger” helping to inspire a viewer to learn and memorize the song on piano.

Ryan also performed for several charity fundraisers, raising thousands of dollars for the University’s Student Emergency Fund as well as the House of Ruth. 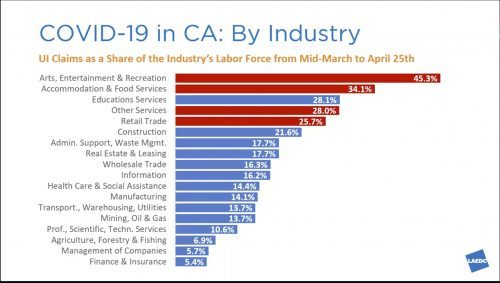 This pandemic has had a profound impact on the entertainment industry as a whole. Since live shows have been put on hold, as they are unable to produce content in this difficult time, those who work on the shows have had to find other projects to work on until production can resume.

“While claims filed in the arts, entertainment and recreation industry only accounted for 5% of total (unemployment insurance) claims filed in L.A. County, it represents a significant share of the workers in that industry,” said Shannon Sedgwick, director of the Los Angeles Economic Development Corporation’s Institute for Applied Economics, in a recent LAEDC webinar. “For example over 45% of the labor force in the arts, entertainment and recreation industry in California has filed an unemployment claim from mid march to April 25.”

Chelsea Shepherd, a videographer for reality TV, has had to return to her roots in news in order to adapt to these tough circumstances.

Though she originally moved to California to pursue entertainment projects. Shooting for A&E’s “Hoarders” for the last nine years, Shepherd has also worked as a freelance videographer for KNBC in Los Angeles for the last two years, which now provides a welcome source of income.

In working for KNBC during the pandemic, with parts of her job able to be done remotely,  Shepherd says there are some aspects of their new online workflow that she has been pleasantly surprised by.

“When I came here (to Los Angeles), I was trying to shift away from camera operating. I was trying to get even deeper behind the scenes, like production management or producing, but right now I feel like I’m actually producing as much as I’m shooting and editing, I actually enjoy it,” Shepherd said.

Although others like Erin Siobhan Weston, an assistant camera operator for “The Real Housewives of Orange County,” speculates that in a rush to produce content, many networks now feel they are held to a lower standard of production quality, which can have adverse trickle-down effects.

“A lot of shows have been going in this direction where the networks are more and more okay with iPhone footage and non-professional footage coming out for the content,” Weston said.

TLC’s handling of their show “90-Day Fiance” is an example of this, as the show has been retitled “90-Day Fiance: Self-Quarantine” and is now shot exclusively by cast members using their iPhones.

With this dip in production quality brought on by the circumstances of this pandemic, Weston fears this will only give networks greater incentive to make cuts to staff and budgets.

“If this becomes a thing where even the big studios think they can work with a third of the people that we normally take to run these shows, then I feel like that would definitely trickle out into the whole industry,” Weston said.

Film experts and executives also speculate that enhanced cleaning and staffing for COVID-19 protection could add upwards of $1 million to the average movie budget. Additionally, because crews are stretched thin it could also add costly weeks to filming, with estimated daily expenses nearing $400,000.

While many within the industry have been able to find ways to work through the pandemic, only time will tell how far and wide the ripples of COVID-19 travel and how long those ripples will last.