By Brianna Estrada on May 29, 2020 in Feature Slider, LV Life, Multimedia, Podcasts 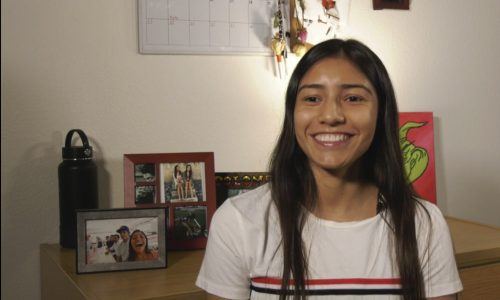 Sophomore biology major Emely Ortega-Martinez, a DACA recipient, has lived in the United States since 2003. / photo by Brianna Estrada

A sophomore biology major and resident assistant at the University of La Verne, Emely Ortega-Martinez appears to be like any other college student – young, athletic, studious and friendly. But she is also undocumented and one of the 700,000 Deferred Action for Childhood Arrivals, or DACA, recipients in the United States.

Emely was born in Michoacán, Mexico, in 1999. Though she spent the first years of her life in Michoacán, Emely’s country of birth is a foreign place to her.

Emely and her family migrated from Mexico to the United States when she was 4 years old. Her father had been working in America for the past two years but found difficulty crossing back into Mexico and therefore remained separated from his family. It was due to this separation that Emely’s parents decided the family needed to make the crossing into the United States.

Emely, her mother and her younger brother did not possess the documentation that would allow them to cross the border legally. Instead the family of three had to take a more dangerous route. In order to avoid run-ins with border patrol and move across country lines without too much questioning, the family followed a coyote into the dark tunnels beneath Mexico.

Emely’s family was one of many making the daunting journey. Their group walked blindly down dark, muddy tunnels, following the coyote into the unknown – fear and hope pushing them forward.

“What actually ended up happening is that they had to split up me and my mom because my brother was making too much noise and the other families wanted to leave us behind. The other families didn’t want to be put at risk,” Emely said.

Emely was left to make the crossing alone as her mother and brother stood behind to join another group. An elderly woman who was a coyote, passed Emely off as her granddaughter and brought her to a safe house where she waited to be reunited with her family.

When the trio were finally together again, they traveled to their final destination – San Diego, where Emely’s father waited for his family to begin their new lives.

Emely settled quickly into American life. She went to school, began learning English and made friends. But Emely soon realized her life was not as simple as she thought.

“So at the beginning, it was more of like I didn’t know that I was undocumented,” Emely said. “I didn’t know this was something that I should be scared about. I didn’t know that this was something that my other family members feared for us. And then in middle school, being an undocumented student, that’s when I started finally realizing, ‘Oh OK, this is who I am, I’m not like everybody else, I’m not like this girl or like this boy. Our situations are different. They’re safe here… I’m not safe here.’”

It was in 2012 though, during the Obama administration, that an opportunity presented itself for young undocumented immigrants like Emely. Obama introduced the then new immigration policy, DACA.

The program allowed immigrants brought into the country illegally as children to work and go to school without fear of deportation for a renewable two-year period. Though the policy did not provide a pathway to citizenship, it opened the doors to possibilities that young immigrants had only dreamed of.

Emely took the chance and applied to the program, obtaining her DACA status at 16. Receiving DACA was an exciting and long-awaited moment for many young immigrants, but for Emely, it raised conflicting emotions.

“OK so when I finally got DACA, I guess I felt guilty cause I would be receiving something I knew my parents would never be able to receive or it wasn’t in the near future,” Emely said. “So that’s when I (was) living in fear. But it wasn’t for myself, it was living in fear for my parents… It was always like ‘yes I’m safe, but what about my brother, and what about my mom, and what about my dad?’ Then it wasn’t until my brother got DACA when he turned 16 just two years ago that that started dialing down because I knew that if anything – if my parents got taken away – I would still have my brother ’cause he would be here with me.”

DACA brought new opportunities, but it also came with unanticipated worries. Families now had mixed statuses and risked being torn apart, as some members could be deported at any time while DACA recipients were allowed to stay. This was not Emely’s only concern though. She says her stressors increased dramatically four years ago after the presidential election.

Donald Trump was elected the 45th President of the United States in 2016, following a campaign that had been built around anti-immigration rhetoric and the promise of stricter rules and regulations over immigration policies.

After Trump took office his administration began coming down hard on immigration, imposing travel bans, threatening to close the southern border and authorizing raids to round up undocumented people. Over the last four years, social and political discourse has only grown more divisive over the topic of immigration, increasing stress on undocumented immigrants across the nation.

The greatest worry Emely faces today, is the possible termination of DACA. Trump has been targeting the Obama-era policy since his administration came into power. In 2017 Trump announced his plans to phase out DACA – a decision that was met with widespread criticism and objection.

Since the announcement, several lawsuits have been filed against the Trump administration for the unlawful termination of the program. Injunctions have also been issued by U.S. district courts in California, New York and the District of Columbia, allowing recipients to keep renewing their deferred action status. In 2018 the case made its way to the Supreme Court and deliberations are now underway with a decision expected to be delivered by next month.

Until a decision has been made, the hundreds of thousands of so-called Dreamers across the country must continue living in a state of limbo. Never before has the future been more uncertain for Emely. This has contributed to an ever-present stress that has had significant effects on her mental state.

“Hearing all these things on social media, or even laying (in bed) at night, and the last thing that I see is what’s going on politically and (thinking) how that can affect me … definitely keeps me up at night,” Emely said. “Even when I try to push it away, even when I try to distract myself … even with school, it doesn’t always work. I think that sense of uneasiness is always there, and it’s something that like doesn’t let me sleep… I don’t sleep through the night.”

Though Emely has never been diagnosed with depression, she says that she is like the thousands of other young undocumented immigrants suffering in silence.

“And I guess I just realized (that) ‘no, I’ve never really been happy. It’s always one thing or another that I’m just not happy. I think I just finally realized that I’ve been depressed for a while and I didn’t know it… This is a topic that affects me regardless of where I am. Whether I’m at school, whether I’m out shopping, whether I’m just- even at home ’cause it’ll never leave you.”

According to a study done by Rice University, Dreamers are at a greater risk of experiencing psychological distress. The study found that young, undocumented immigrants reported higher levels of anxiety, depression and even post-traumatic stress disorder. It also found that the stigma of “ni de aquí, ni de allá” or “neither from here, nor from there” caused many Dreamers to experience conflict about their self-identity – a sentiment Emely is very familiar with.

“If I go back to Mexico, they see me like ‘you’re not from here like you don’t belong here’. And then I’m here and it’s the same situation… Where do I go? Where do people like me go? Where do we belong? … Who will determine that for us? Why can’t we determine where we belong?”

The ongoing COVID-19 pandemic has made a stressful situation even more tense. Immigrants have been one of the groups hit the hardest, as so many work in essential businesses making them more vulnerable to coronavirus exposure. They are also dealing with a loss of resources during the shutdown, including the closure of immigration offices which has put a halt to things like DACA renewals. Emely is one of many needing to complete her renewal.

“Basically what’s going on with me is that I talked to my lawyer, and in order to renew everything we just have to wait,” Emely said. “There’s nothing we can really do. We can’t do anything else except wait until the offices reopen so we can finish the paperwork.”

For Emely this is just another situation that is outside of her control. Just as she cannot force the immigration offices to reopen, she cannot determine the future of DACA. The decision the Supreme Court will soon reach has the potential to dramatically change the lives of hundreds of thousands who call this country home.

Dreamers risk losing their work permits, drivers licenses, health insurance, even scholarships. But the greatest threat they face is deportation. Though this is considered to be the worst-case scenario, Emely and her family have discussed the different possible outcomes. Emely said her parents have already decided that regardless of the decision the Supreme court makes, their children are not leaving the United States.

Although the path ahead is unclear, Emely has hope for the future.

“I just hope that one day they’ll let us belong where we actually belong… And I hope that I’m in a position where I have accomplished what I came here to do in the first place: Get an education, become a dentist, and make my family proud.”

Brianna Estrada can be reached at brianna.estrada@laverne.edu.