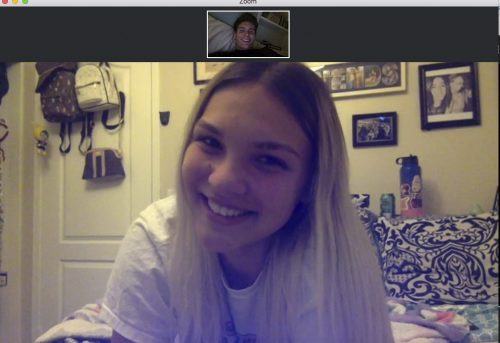 Jasmine Chandler, freshman kinesiology major, is on a Zoom date with Alex Wikle. Chandler uses Zoom as a way to get to know her date without the possibility of a hook up. / screenshot by Noelle Blumel

Couples and singles around the world have been “Zooming” to find creative accommodations to help keep their love life alive and well, despite being forced to social distance.

Dating apps have seen a significant increase in their usage during quarantine, in fact, analysts from the dating app Bumble reported they have seen a 21% increase in messages exchanges.

Thomas Bilston-John, freshman accounting major, said he is currently single and uses dating apps such as Bumble and Tinder. He said a significant difference for him in using apps has been the inability to connect on a physical level so as to comply with social distancing measures.

“A disadvantage of online dating is knowing that these dates have the ability to hide information about them which can lead to potential identity theft,” Bilston-John said. “Also, physical closeness is close to zero.”

However, he did add an advantage to using dating apps has been his ability to date at his own pace, which allows for his self confidence and dialogue skills to grow.

Jasmine Chandler, freshman kinesiology major, said while she has some dating apps, she has taken advantage of Zoom because, unlike Facetime, Zoom has the option to “share screen” which allows for her and her date to watch a movie in sync.

“We’ve gotten to know each other. You can actually tell their real intentions as they can’t have a hookup or a date,” Chandler said. “They are forced to get to know you before you go on a first date and other things.”

Chandler added people should be cautious in the decisions they make to avoid being catfished and take the time to truly find out what someone’s intentions are.

However, singles are not the only ones making the most of their time apart from their potential matches.

Freshman biology major Jordyn Patton said since her and her boyfriend do not see each other often due to long distance. They instead rely on the internet to see and speak to each other. She said, however, wifi connections have been an issue, so they utilize the feature Google Hangouts to communicate.

“One advantage is that we send food to each other’s houses, so a lot more take out is always a plus,” Patton said. “We try to use video calling a lot too.”

Camryn Sievers, freshman public relations major, said her and her boyfriend of two years are quarantining together and have been living a healthier lifestyle because they have set schedules to complete tasks and hold each other accountable.

“We’ve been living a healthier lifestyle together because that’s all we have to focus on,” Sievers said. “We are more united. I hope we keep up this communication because it’s been great for us.”

Sievers added people in relationships should really take this time in quarantine to work on their relationship because this extra time is going to be gone and you don’t want to feel as though you did not grow together.

Noelle Blumel can be reached at noelle.blumel@laverne.edu.

Commentary: I didn’t set out to be an essential worker
Photographer hopes his work will inspire action