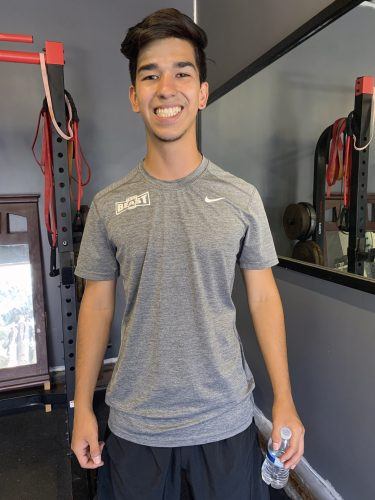 Arthur Romero, owner of BEAST, stands proud of the company he has built on his own and the success he has gained at an early age. / photo by Erica Rae Sanchez

Arthur Romero, a junior kinesiology major at the University of La Verne, spends every ounce of his free time working on his business, Binary Exercise and Sports Training, known as BEAST.

BEAST is a non-profit organization that specializes in training young athletes in speed, coordination, strength and agility.

The small company, with those across the state and nation, was severely hit by the stay-at-home order that went into effect in March – in response to the COVID-19 pandemic, which to date has killed nearly 100,000 Americans.

One week before the order was placed, all in-the-field operations for BEAST came to a halt, but that did not mean that the business wouldn’t persist during this unprecedented time.

As with most small businesses, BEAST had to retool if it was going to survive. The organization was designed to be interactive, competitive and dependent on human connection.

“At the beginning it was really tough because BEAST is a small business,” said Romero, 21. “We do everything in large groups because we are athletes. We are constantly competing with each other. It was a big hit for everyone, not just the coaches, but for the players because they’re the ones that really benefit from all of this.”

BEAST does both private and group training, and team coaching of young athletes, elementary through high school age. The organization  has 13 coaches with various backgrounds in sports training, who instruct athletes privately and as different teams. There are different football teams within the organization, separated by age.

The workout videos begin with a warmup that involves dynamic stretching, stretching out their feet and ankles. Athletes have to do a circuit, working out both their legs and arms at the same time. The exercises are somewhat personalized to each athlete depending on the sport and position they play.

“The kids that are doing the online training are getting fed information that they would not get anywhere else,” Romero said. “We are teaching them the next level stuff, the bread and butter of what they are going to need to know when they are the next level.”

He added that he has used this difficult moment to see the bigger picture of what he can do with his business. The ways that he can remain open and serve the people, even though the athletes cannot be on the field. One component that he found successful was Zoom film sessions. The film sessions play back old videos of football players and the clients themselves playing; the athletes then are asked to take note of what they could have done better or differently.

BEAST was running with around 90 athletes and 13 coaches before quarantine but due to the lack of gatherings that are supposed to occur, those numbers have dropped to around 35 athletes and six coaches currently.

“Right before quarantine had started, we had started dissecting film. There were at least 20 players on it and several of the coaches, and we were breaking down the film and looking at some of the mistakes and what we could improve on or make better,” Romero said. “This is something that students do not do on their own, they don’t watch films, they don’t review the game and think about what they did wrong or could do better and that is the key to success. Especially with student athletes that are visual learners, they need to watch in order for it to click in their minds.”

Another tool Romero has found critical to keep clientele is social media. The BEAST Instagram account provides not only information about the company but also posts different workout exercises and shows how to do them.

Romero and his coaches also meet through Zoom to strategize ways that they can improve the virtual program.

Romero initially found his coaching staff through people interested in coaching for the organization, and he has offered them a role in BEAST based on their prior training and experience. Some of the coaches have taught for high schools, have been kinesiology majors, have worked alongside college football teams or have been coaching football for many years.

The idea for BEAST came from Romero’s own struggles with not having such an affordable local service when he was a high school athlete.

Romero attended Don Bosco Technical Institute High School in Rosemead, where he felt that he did not have the necessary resources to thrive in an athletic setting. He decided to reach out and go to personal training on his own, and then he would go back to school and teach his football teammates the drills that he learned on the weekend.

“There are a lot of kids that do not get a lot of coaching, and I want to be able to be a good coach to them and do it at a low price because I never had that,” Romero said.

“The slogan with BEAST is ‘BEAST by nature’ meaning everybody has the innate ability to achieve success –  it’s already inside of you,” he added. “It is about how hard you work and what you put your energy towards.

“Me and one of my coaches used to work kids out during the week and on the weekends. We then started a team and that helped build this brand and network, but then we separated and began to do our own things,” said Romero.

BEAST is operated solely by Romero, with part-time coaches for various team levels that play and practice under the BEAST name. There is a 10, 12 and 14-year-old team, and then three high school teams that compete against city and club teams.

“The reason why parents come to BEAST rather than going to the community, is the attention to detail (that’s) very specific to the athlete. You’re not getting a general workout,” Romero said. “These private and personal trainings have provided extensive knowledge about the sports that these athletes are playing because of the coaches that come from various other sports affiliated professions.” 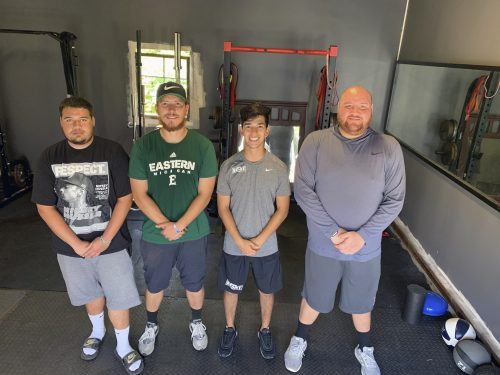 The young athletes participating in BEAST receive a tracksuit, a personalized jersey, and practice t-shirt. Romero makes it a point to include the apparel in their spirit pack to make them feel like they belong to the family that is BEAST.

Starting up this program was not easy for Romero.

“A lot of people would tell me ‘oh you can’t do that,’ ‘you don’t know what you’re talking about.’ But my thing was ‘okay, I might not know everything (but) I know certain things, and I can coach these certain things very well’,” Romero said. “I felt like I had a good base, and from there it was just about building up the athletes.”

One of Romero’s biggest challenges was figuring out the finances of it all and navigating that part of the process at the age of 19 without financial support from family or friends.

“People do not see the money that goes into the insurance, the business licensing and the number of hours that I had to put into the organization, to understand the difference between a non-profit organization and corporate,” Romero said.

Romero learned how to talk to the athletes’ parents about finances and to be comfortable communicating with adults  about important issues in regards to BEAST and their child. He said he has learned to be more comfortable in uncomfortable situations.

He is constantly on the lookout for opportunities to widen his brand and knowledge to push his organization to the next level.

Romero walked to University of La Verne President Devorah Lieberman’s office and left her a BEAST shirt with his contact information so that she could reach out to him – to receive advice from someone he looked up to. She did not respond immediately. Then one day he saw her walking around on campus and went up to her and introduced himself and explained that he was the one who left the shirt in her office.

After talking to her about his vision of what BEAST will look like, Lieberman put him in contact with Sean Snider, director of the University’s Small Business Development Center.

Snider, who manages a grant program and he oversees companies and attempts to make them the most efficient as possible, helped Romero.

“Arthur and I worked on formalizing the business and budgeting to determine what it would take to make the business sustainable,” Snider said. “Arthur had industry experience, he had a clear mission and he was committed to seeing his vision take shape.”

This business is going into its first fiscal year on paper. The first year was off the books, as Romero was figuring out what kind of business he wanted and what direction he saw everything going in. His first year on books’ revenue is roughly $30,000. He hopes to build from here.

Romero said he  plans to remain the sole owner of the program with a strong support team behind him because of the amount of hard work he put in by himself.

He is aware of the time commitment it takes to run a business by himself and that is why he is constantly thinking about his business.

There are many competitor training organizations such as Pro-Way, Ground Zero, and Premium. There are many other training facilities one can go to and receive similar training, but there are tactics and reasons why BEAST stands out. Mainly the people, the content and affordable price.

Since the pandemic Romero has offered discounts.

Film sessions and at-home workouts are free and complimentary of the organization in order to encourage the athletes to remain active and working on themselves during this time; they are also promotional to gain clientele, Romero said.

Private training and personal training range from $20 a day to $400 a month. The training is cheaper if the athlete comes more frequently. The prices vary depending on what type of training the athletes choose, and frequency.

Daniel Fierro, an assistant coach, spends his time involved with BEAST coaching one of the high school teams. Fierro has spent 16 years coaching on other football teams, but the one reason he stays with BEAST is because of the familial bonds.

“I not only want to give back to the kids within the program in my area, but I want to help guide Arthur because he reminds me of myself when I was younger,” Fierro said.

Jaison Vargas, a 17 year-old player on the Apex High School team, spends his evenings and weekends practicing for BEAST. Vargas is a sophomore at Garfield high school and brings the mechanics that he learns on the field with Arthur to his high school football team.

“I have been working out with coach ‘A’ since I was a seventh-grader, which makes me feel comfortable working out with him and he is the one who has helped me out with my craft, mechanics and my speed training,” Vargas said. “He focuses on the little stuff and the little stuff changes the game. Fixing those little errors that you have can make you into a better player on the field and he has helped a lot. He helps you be an overall player.”

There are many types of training one can receive at various other camps, but one thing that keeps the players coming back is the brotherhood that is developed on and off of the field.

“I see him as a big brother, not just as my coach. I can always ask him for help or if I need advice. I am grateful for that and we are just like a family,” Vargas said.