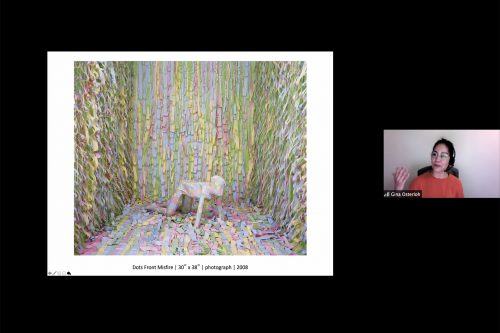 Artist Gina Osterloh, assistant professor of art at Ohio State University, presents her work virtually as part of the online visiting artist talks, sponsored by the Carlson Gallery and the photography department, Oct. 22 via Zoom. The virtual presentation was hosted by Adjunct Professor of Photography D. Hill. / screenshot by Max Sierra

Gina Osterloh, a photographer and performance artist from Ohio, shared her experiences as a professional artist with a group of 54 University of La Verne students via Zoom on Thursday.

Osterloh’s art deals with photo tableaux environments, meaning a picture of a scene with a costumed and posed subject.

The early work of Osterloh dealt with the idea of camouflage, and started with simple military camouflage pants. In the picture “Burnt out, Died, Got Some Rest and then Waited (Somewhere Tropical In My Backyard),” Osterloh is in a tropical setting reflective of her family’s Filipino roots. The camouflage in this piece is relatively simple compared to the rest of her work, with Osterloh laying in the dirt with camouflage pants.

Osterloh wanted to push the use of camouflage beyond military and fashion.

“What really is camouflage? It’s the ability for a body to mimic one’s environment,” Osterloh said.

In “Blank Athleticism” Osterloh blends into the frame and the environment. The piece has a square light blue backdrop and Osterloh becomes a part of the frame of the photo by wearing clothes that match the backdrop.

There is no better example of Osterloh’s definition of camouflage than “Dots Front Misfire.” The frame is covered in pastel blue, pink, yellow, and green strips of paper, and a figure in the center completely covered in these same strips of paper. The figure in this picture mimicked their environment with their body.

“The construction of identity, how we read skin in terms of race and representation, is a major influence in all of my work,” Osterloh said. “I consider the rooms that I build to be extensions of the body or in a way a second skin.”

Julie Orser, an event attendee, asked Osterloh why photography is the perfect method to address identity.

“Photo tableaux is a physical and psychological space that can hold and address the body,” Osterloh said.

Osterloh also does performance based art. “Press and Outline” is a performance where she presses into and outlines her own shadow that she recorded on an old school film camera.

“It is a very slow, intimate performance for the camera,” Osterloh said.

Osterloh adapted “Press and Outline” into the live performance “Shadow Woman.” She received many positive responses from audience members, who came up to her to express their thoughts on the performance.

“It’s amazing how much emotion can transpire by a photo or performance,” Selena Gonzalez, an event attendee, said.

“I really enjoyed artist talks as a student and I want to bring the same experience to my students,” Hill said.

Shannon Benine, associate professor of photography, said that the Online Visiting Artist Series events are one of the most beneficial resources for students at the University. She said that it shows students how to become a creative trailblazer.

“There isn’t a path set for you, you have to create your own,” Benine said.

Osterloh’s talk and other lectures from the Online Visiting Artist Series can be found at ulvphotography.org/videos.