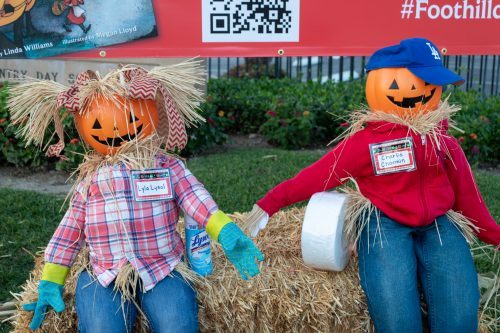 Lyla Lysol & Charlie Charmin scarecrows sit in front of the Seedling School on Harrison Avenue in Claremont. They are among the more than 90 scarecrows perched in front of homes and businesses through the month of October across the city, as for the Scarecrow Party. One of the safe Halloween festivities this year, the event which also includes a contest, is sponsored by the Claremont Chamber of Commerce. / photo by Christine Diaz

The inaugural Claremont Scarecrow Party showcased decorated scarecrows in front of homes and businesses across the city throughout the month of October.

The Scarecrow Party, which was also a contest, had  a total of 95 participants.

Randy Lopez of the Claremont Chamber of Commerce was a coordinator for the event, which by its nature worked, amid the coronavirus pandemic that has caused so many celebrations to be canceled.

“The idea of not having any type of community event was just so sad for all of us, so we thought we would do something to potentially have fun,” Lopez said. “We decided to create something that was just fun without a lot of rules (for which) everybody here can participate. Just simply put a scarecrow up in front of their business or their home, and create this larger event with scarecrows throughout the city.“

Scarecrows are also posted in front of The Diamond Center Jeweler, Saca’s Mediterranean Cuisine, Some Crust Bakery and other small businesses around Claremont Village.

Terri Riojas, owner of Rio de Ojas, folk art and home decor store on Harvard Avenue in the Claremont Village, worked with Lopez in putting on the event. And she also participated. 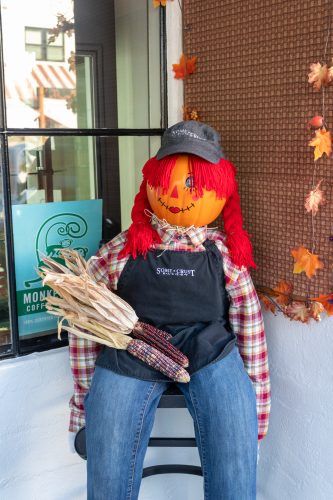 “Cookies McCrow” at Some Crust Bakery on Yale Avenue in Claremont is one of more than 90 entries in the Claremont Chamber of Commerce’ Scarecrow Party. During the month of October residents and business owners are displaying scarecrows in their front yards and porches. / photo by Christine Diaz

A 10-foot scarecrow greets customers as they walk up to her store. Riojas said her inspiration for this scarecrow came to her years ago when. She’d created the face previously and then decided to do the full body for this event. She named her scarecrow Katrina.

For more information on the scarecrows, visit the Claremont Chamber website.