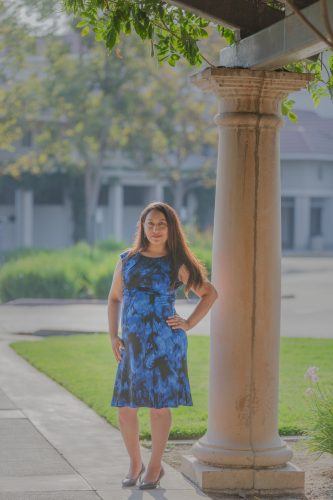 Jacqueline Elizalde, a business administration major and CAPA student, is running for mayor of Pomona. Elizalde, who hopes to see an end to human trafficking in Pomona, also does phone banking during the week and canvasses on weekends to encourage people to vote on Nov. 3. / photo by Mya-Lin Lewis

Jacqueline Elizalde, a senior business administration major at the University, is running for mayor of Pomona in the Nov. 3 election.

One of Elizalde’s biggest concerns is human trafficking in her city.

Elizalde said she had tried to get the city of Pomona to make this a priority, but when she was not satisfied with their response, she decided to throw her hat in the ring.

Elizalde said she also wants to see the businesses in Pomona prosper, and she wants to make Pomona a more investor-friendly city. Elizalde said Pomona has plenty of open space and she wants to loosen the city’s restrictive ordinances for business to make it more desirable for new business, which she believes will also bring more jobs.

She said she wants to improve the communication with the business owners and developers to create a business-friendly environment in the city.

Elizalde, 38, is a first-generation college student. After graduating from high school, she she waited to pursue higher education, first attending Citrus College before transferring to  La Verne.

Elizalde also works for San Bernardino County’s Human Services Department, where she helps families living in poverty with grants and housing,  among other things.

Elizalde has also served on the Pomona Public Library board of trustees, on the Pomona Cultural Arts Commission and is an appointed delegate for the California Democratic Assembly in District 52.

Elizalde said she prides herself on her involvement in the community and she loves meeting the everyday people in the City of Pomona and learning what she can do to help them.

“My primary goal is to empower and engage the community to want to change Pomona,” Elizalde said.

Frank Villa, truck driver for Unified/Unify, said he believes Elizalde is going to make a difference in the community.

“I have never seen someone so passionate and genuine about helping the working person. She truly cares about our community,” Villa said.

“Jacqueline is a fighter, Manzanares Ybarra said. “She is going to stand up for what she believes in, and she believes in what’s best (for) the people.

Elizalde has the endorsement of Congresswoman Norma Torres, D-Pomona.

Torres said she believes Elizalde is the right person to make a meaningful change in Pomona.

“I see myself in her,” Torres said. “I want someone who understands and cares about the city of Pomona and Jacqueline cares and understands because she is truly one of the people.”