Despite uncertainty about the return of athletic programs in the spring, University of La Verne’s student athletes remain hopeful and eager to possibly play in the upcoming season.

Among student athletes interviewed, five confirmed they would come back and play in spring if the opportunity was given to them. A sixth athlete indicated the desire to return, but could not give a definitive “yes.”

All of them, like baseball player Brandon Shiota, said their love for the sport they play drives them to want to play as soon as possible.

“We all know we are probably not going to play at the next level,” said Shiota, senior business administration major. “So to play at La Verne is our last chance to play and be part of a team and compete in the sport we all grew up playing.”

“A big reason I chose La Verne was to play volleyball,” said Ayana Mier, sophomore volleyball player and biology major. “So it’s kind of frustrating that we are not allowed to play right now. I feel as soon as we get the go ahead I’ll be there. It’s really hard to not be playing a sport that I’ve been playing for a really long time.”

No definitive decision has been made by either the Southern California Intercollegiate Athletic Conference or the University on whether and how athletics might return in spring semester 2021.

According to University President Devorah Lieberman’s Nov. 10 email to the University community, limited activities will be considered for athletics in accordance with the Los Angeles Department of Public Health, NCAA and SCIAC guidelines for the spring semester.

When fall semester sports were canceled due to the COVID-19 pandemic, athletic programs across SCIAC had hoped both fall and spring sports would play during spring 2021.

But COVID cases are on the rise again. Just this week the country marked the grim milestone of a quarter million U.S. deaths due to the virus. So plans for athletics remain in flux.

Three student athletes cited the ability to play their sport at La Verne as one of the main reasons they chose to attend the University.

“I chose La Verne to play soccer mostly. I came to study the degree that I’m in right now and play soccer,” Ivana Fatovic, a senior soccer player and psychology major, said.

Rylee Callen, a member of the women’s volleyball team, also held this sentiment.

“I came to La Verne for athletics and academics, because I love playing sports and I wouldn’t give it up,” Callen, a sophomore chemistry and criminology major, said.

But Kaylee DeMarchi, a junior soccer player, had reservations about returning for a modified season.

“Honestly it would be a ‘maybe,’ just because it sucks to have a modified season,” DeMarchi, kinesiology major, said. “Playing a collegiate sport is a full-time job. It takes time away from friends and family, and so if it’s not going to be a true season like my last two years, then it will be a decision that will take a lot more time to think about.”

The University has been slow to give out new information to student athletes, according to five of the six athletes interviewed. However, all of the athletes were pleased with how their coaches have delivered information to them.

Fatovic, Mier, DeMarchi, Blanco and Callen all noted that their coaches have done a better job of keeping them informed on the situation than the school has.

Fatovic, Mier and DeMarchi all referred to the recent email about spring semester being online sent out by the University as an example of how communication could be better.

“A lot of the information we do receive, we get through email and our coach has no idea,” Fatovic said. “For example, (when) we found out that spring was going to be online and our coach was really upset because she wished that she had the opportunity to tell us first rather than us getting it through an email.”

Volleyball sends off seniors with a thriller win over Cal Lutheran 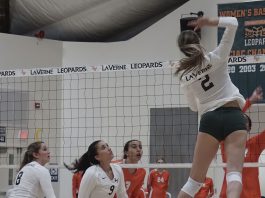 Volleyball gets loud for sweep of Caltech