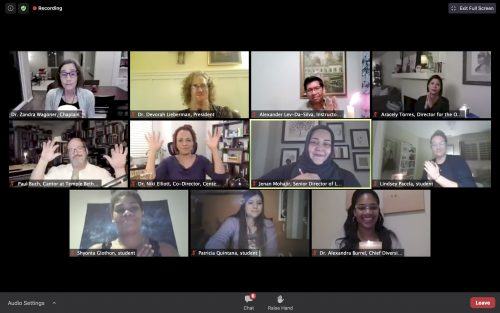 Members of the University of La Verne community come together to celebrate the hardships everyone has overcome this past year and to strengthen the community’s bond to each other on Nov. 5 at the We Are Each Other’s event held via Zoom. The event was led by University Chaplain Zandra Wagoner. / screenshot by Sebastian Ibarra

After months of social distance and isolation, University of La Verne students and faculty got together to celebrate and affirm the bonds of the community on Nov. 5 over Zoom.

The name for the event, We Are Each Other’s, was drawn from the American Poet Gwendolyn Brooks. Brooks was a poet and activist from Chicago dedicated to telling the story of Black communities. In her poem, she discussed the truth of communal life.

The event was led by Zandra Wagoner, University chaplain, who spoke about the need to affirm the value and sacredness of community even in the midst of a very difficult and divisive time. She said that the event was a reminder of the deep relatedness that is shared by every person who is a part of the University community.

“We belong to each other,” Wagoner said. “We are stuck with each other. All we have is each other.

A candle-lighting ceremony kicked off the main portion of the day’s events. Four University faculty members, Wagoner, Alexander Lev-Da-Silva, Aracely Torres, and Alexandra Burrel, lit their candles one by one. Everyone in attendance was welcomed to light their own candle during the fourth lighting.

Niki Elliott, Co-Director of the Center for Neurodiversity, Learning, and Wellness, led the group in a coherent breathing exercise. Elliott said that slowing the breath helps people achieve a state of alert relaxation.

To try the exercise at home, be seated with both feet planted softly on the floor and hands in the lap. Focus the breath through the stomach and take deep breaths in and out through the nose.

Devorah Lieberman, University of La Verne president, spoke about the importance of community and the impact of We Are Each Other’s. She said that during times of uncertainty is when everyone can get strength and unity. Lieberman said that the University needs community more now than ever before.

Shyonta Glothon, a senior major in theater and psychology, said that community is what people build together and the peace they strive to create in order to coexist.

“Community is not a place, but the people who dwell there,” Glothon said. “A place can be taken or changed, but people are always there.”

“However we understand that which we call God, one of the aspects of God that everyone can have a connection with is the thread that connects us all,” Buch said.

The songs Buch played had messages of welcoming those who are lonely with open arms, and the value of community.

Jenan Mohajir, Senior Director of Leadership at Interfaith Youth Core, spoke about the difficulty of finding community during these strenuous times. She used another poem from Gwendolyn Brooks as an example: “True, there is silver under the veils of darkness. But few care to dig in the night for the possible treasures of stars.”

“We are in the midst of darkness,” Mohajir said.

Mohajir said that commitment to doing the hard work is key. She said that the job of Interfaith Leadership is to build strong bonds and relationships that they can lean into and rely on during times of uncertainty.

Mohajir quoted a passage from the Hadith, a record of the traditions or sayings of the Prophet Muhammad.

Mohajir spoke about what this passage means to her and what conclusions she draws from it.

Commentary: Quarantine life in Vietnam is an unexpected plot twist
‘Twilight’ looks back to deliver emotional truth of racial injustice