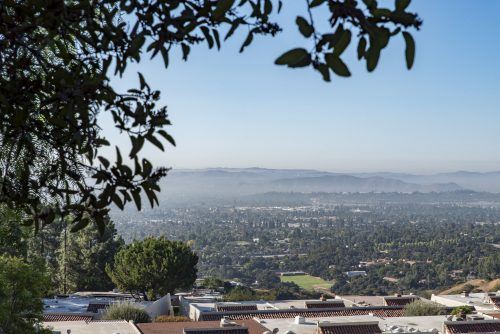 The five-mile long loop trail at Claremont Wilderness Park offers scenic views and a chance to stay active and fit during the pandemic. The park is open from dawn to dusk every day and the city of Claremont has instituted social distancing requirements and a number of other COVID-19 safety precautions. / photo by Max Sierra

The Claremont Wilderness Park Five Mile Loop Trail has given people a sense of normalcy despite the complications caused by the pandemic.

Claremont Hills Wilderness Park reopened in May with new social distancing guidelines to keep hikers safe. The park installed trekking signs to direct traffic that hikers are required to follow. Parking and amenities such as water fountains and restrooms have been closed to avoid crowding.

I went to the trail this weekend, and it was filled with mask-wearing couples looking for the enjoyment of being outside. The warmth from the sun and sounds of the birds chirping on the trail created such a calming atmosphere and pushed me to complete the entire hike as I was enjoying the scenery too much to stop.

Brayan Herrera, a Pomona resident, said he likes to hike in the morning because he enjoys the essence of nature.

“The air is so crisp and everything is just beautiful,” Herrera said. “I have been coming to this trail since I was in middle school and I still enjoy it every time I’m here.”

The trail is easy to navigate through as the pathways are wide, which are perfect for social distancing. Along the sides of the trail is a variety of colorful rocks where small lizards and interesting bugs roam.

For every mile, there is a bench waiting for those who need to relax and catch their breath. I pushed myself past the first checkpoint and continued up the hills. The pathways stagger from hills to flat lands, and I must admit that my calves were on fire.

At the second checkpoint, I decided to rest for a few minutes and regain the strength in my legs. There is a beautiful view of the city and the tranquil sounds of the trees swaying in the wind. The sounds of the city could hardly be heard from where the bench tables were, but everything could be seen so clearly.

New hiker Angelena Mendoza, an Upland resident, rested at the bench too after a long run up the trail.

“I usually come here with my mom to run so I was very excited to hear that they opened the trail back up,” Mendoza said.

Mendoza mentioned her lack of interest in physical activity, but hiking the Claremont Trail is one opportunity she will never pass up.

“There’s just something really cool about being able to come out here when I can now,” Mendoza said. “I hope things go back to normal so I can bring the rest of my family again.”

As the trail increased in elevation, I crossed paths with many people who run this trail as a part of their daily routines.

Ernesto Rodela, a UC Riverside student who lives in Pomona, shared his progress since he started hiking the Claremont Loop regularly.

“I was worried about my endurance dying out when the Loop was closed but I was able to pick up right where I left off,” Rodela said.

Rodela mentioned that the first few times he hiked the Claremont Loop he struggled and wasn’t able to complete the five mile trail. Now, he said he knows the trail like the back of his hand.

“I feel like this is the best way to get started with getting active, especially if it’s something you aren’t used to,” Rodela said.

The return to my starting point was easy. I ran down the hills and reached my destination in half the time it took me to hike up. As someone who has struggled to be active during the pandemic, this trail became my new favorite spot to engage in physical activity and be outside in a safe manner.

Admission information for the Loop and Claremont Wilderness Park, along with guidelines and maps, can be found at https://www.ci.claremont.ca.us/government/departments-divisions/human-services/parks/claremont-hills-wilderness-park-chwp.