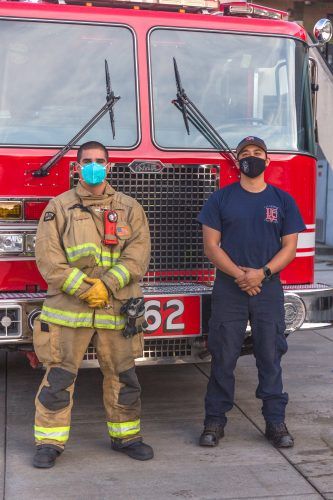 Probationary firefighters Davis Cook and Stephen Bautista stand at the ready for their next call at the La Verne Fire Department main headquarters at 2061 Third Street. The city is considering a switch and may soon be contracting with Los Angeles County Fire Department. / photo by Mya-Lin Lewis

The city of La Verne is considering giving up its locally controlled fire department and instead contracting with Los Angeles County Fire Department for the same service instead as a way of addressing staffing shortages and other problems that have impeded the La Verne Fire Department recently.

This decision to consider this change came after a 4-1 vote by the La Verne City Council last month.

“At the end of the day, we are entrusted to protect our residents and if we can’t provide that, then we must look for other avenues to do so,” La Verne Mayor Tim Hepburn said.

To study the relative benefits of this possible change, the city brought in a third-party consultant, Messina and Associates, to evaluate a report provided by the Los Angeles County Fire Department about the services they could provide to La Verne and the possible costs.

This report was sent out to all La Verne residents prior to the Nov. 2 meeting, and residents were invited to offer feedback.

“We had a 30-day comment period regarding the initial analysis for our community members to share their thoughts and opinions on the matter,” City Manager Bob Russi said.

That month-long window brought over 120 comments from La Verne residents.

Donna Redman, associate professor of education and former city council member, said although shifting the city’s fire department to Los Angeles county could be cost efficient, the city will lose the personal touch the department has with its residents.

“I would be more inclined to support this decision only if the feasibility study clearly shows that we are going to save money by doing so and provide better safety for our residents,” Redman said.

Among the key findings of this report was that the La Verne Fire Department does not have the necessary resources on its own to respond to potentially high-risk, low frequency incidents, nor does its current mutual aid cover the greater portions of the city, which can result in a delayed response of the additional resources needed to provide an effective response for high-risk, low frequency incidents.

As of now, the La Verne Fire Department  has eight firefighter/paramedic vacancies.

The La Verne Fire Department has enough staff currently to have nine firefighters on duty at all times, which does not meet any of the numbers needed for each type of incident, according to the report.

In addition, the report shows that the La Verne Fire Department has difficulty with employee retention, which is exacerbated by several factors, including a negative perception of the department, lower salary and benefits, limited advancement opportunities, and uncertainty about the department’s future.

La Verne resident Victor Arteaga said that he was in favor of the Los Angeles County Fire Department taking over because of the lack of resources the city can provide the fire department.

“The size of that (Los Angeles County) department logistically can provide a lot more than La Verne, including hazard materials and wildland maintenance,” Arteaga said. “I think there’d be a better flow of logistics when the county is providing all those services, and we aren’t off the radar but on the radar as one of the communities that needs that preventative maintenance.”

Arteaga, who was a reserve for the La Verne Fire Department from 1990 to 1996, said that he has seen issues with staffing and response times, especially to northern parts of La Verne, where he lives. Arteaga said that moving to Los Angeles County Fire Department control might remedy that.

Arteaga said that the most important thing to consider was keeping the community safe.

“I know the most important thing is being able to provide the emergency services that we pay for,” Arteaga said. “God forbid it causes a loss of life or property, and that’s what our tax dollars are put to. Needless to say, I’d sleep better at night if I knew there was never an issue with staffing or equipment needed by firefighters in providing those services.”

Ultimately the review left the city council with two options: Either the city shifts to Los Angeles County Fire Department control and faces the increased costs, or the city maintains its local control of its fire department and directs additional funds to increase local staffing.

“If we choose not to fall under county control, we would need to rebuild the fire department,” Hepburn said. “One of our biggest challenges right now however is retention rates … mainly due to a lawsuit we had a while back.”

In 2018, the La Verne Firefighters Association sued the city after several firefighters claimed that former fire department chief Peter Jankowski lied about the department’s “inadequate” equipment and secretly recorded union members when they gave the chief a vote of no confidence.

The lawsuit ended in a $5.5 million settlement for La Verne Firefighters Association, Hepburn said. Following the lawsuit, many  firefighters left to go to other agencies, including many of the seasonal firefighters. Ever since the fire department has found it difficult to maintain a full staff.

“In order to maintain our local fire department we must start with finding strong leadership,” Redman said adding that there has been high turnover in the highest ranks of the La Verne department.

Under the Los Angeles County Fire Department, the La Verne Fire Department would also receive unlimited mutual aid and resources to protect its residents, eliminating the worry of mutual aid now arriving late to an emergency.

Andrew Glaze, president of the La Verne Firefighters Association, said the association is excited to work with Los Angeles County and provide a safer option for the city.

“When you have a small fire department like ours with limited external aid, transitioning under L.A County could improve our response time to fires and increase the staff, making it the safer option for residents,” Glaze said.

Glaze said the nine firefighters currently on duty for the La Verne area could be turned into 72 firefighters if they were under county control, including the firefighters serving the three other nearby fire stations.

“I look over at those ULV dorms, some of which are five stories high, and we don’t have the capability to safely fight a fire if one were to occur in those buildings,” Glaze said. “Los Angeles County has three fire trucks within a mile radius of ULV. We don’t.”

“A 5 to 10 minute delay of aid can cause significant safety issues,” Glaze said.

Terms of the possible change are expected to be drafted by March 2021, then brought back to the City Council in March for final review.

Hepburn said many of the community’s concerns about this shift has to do with the history of the La Verne Fire Department.

“We usually have Santa Claus on the fire trucks handing out candy during the holiday season, and a lot of people don’t want to lose that personal touch with our fire department,” Hepburn said. “I mean there is a 100 year history behind it.”

“Those kinds of things that the community holds dear to, which I do myself too, could potentially not be around,” Arteaga said. “Ultimately though, the most important is the emergency response.”