By Emily Alvarez, Jaydelle Herbert on February 12, 2021 in News 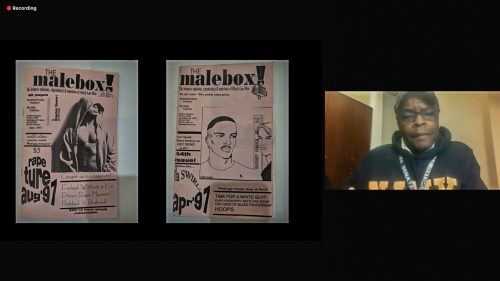 In honor of Black History Month, the University of Southern California hosted a virtual panel discussion centered around four black gay men whose publications in the 1990s were groundbreaking.

Irick, who from 1993 to 1999 published Malebox, a monthly magazine about the intimate opinions, experiences and feelings of emotions of Black gay men, talked about both love and sexual violence among the community.

He said his  magazine had stories in which men recounted their rape experiences, and it also had rape fantasy stories. One front cover, he recalled has a picture of a shirtless, black gay man with a hood covering his face. Irick also talked about how black men struggled with being openly gay.

Victorianne, a Los Angeles native, creator  and publisher of Buti Voxx, the popular “guerilla” zine  representing the African diaspora.  He worked for a law firm in his day job, but he said he created the zine, which was published from 1995 to 2005, in response to the community’s yearning for such an outlet that represented this aspect of black culture.

“Buti Voxx affirmed who they were mentally, sexually,” Victorianne said. “When they turned that last page they knew who they were.”

Ajamu X, photographer and publisher of Wickers & Bullers, created content based on black gay politics. The term “wickers” in Barbados refers to a woman who loves other women.

Bell, president of BLK Publishing Company, Inc., founded in 1988 to publish magazines targeted to the black lesbian and gay community, was also a pioneer who in 1977 he founded Gaysweek in New York, the first mainstream weekly lesbian and gay newspaper, and the first owned by an African American. Bell said he wanted to balance entertainment for the black community with discussions about HIV/AIDS.

“We talked about AIDS from the beginning,” Bell said.

Correction
An earlier version of this story gave an incorrect definition of the word “wickers.” The Campus Times regrets the error.