By Rachel Kendrick, Sarah Van Buskirk on February 12, 2021 in News 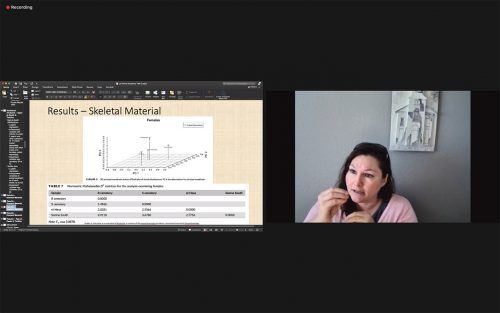 Kanya Godde Chrisco, associate professor of anthropology, gives her presentation, “A Forgotten Monastery in Medieval Nubia,” at the faculty lecture Tuesday. She discussed cranial metrics and the similarities and differences she found while examining skeletal remains from the site. / screenshot by Rachel Kendrick

Kanya Godde Chrisco, associate professor of anthropology, shared her discovery that the people of the cemeteries in medieval Nubia are being profiled incorrectly, Tuesday at the faculty lecture held via Zoom.

Nubia has no geographical border but to pinpoint its location, it is between Egypt and Sudan with the Nile River flowing through it.

During the lecture, Godde Chrisco talked about her re-evaluation process to determine the correct information, so she can provide justice to the descendants.

“There were some inferences in the research that I did not like, that’s why it was important to me to pursue this,” Godde Chrisco said.

She found that there are two cemeteries labeled “S” and “R”. With evidence such as social isolation, age at death, and textile differences, she said she concluded that the “S” cemetery is at a lower socioeconomic status than the “R” cemetary.

Godde Chrisco said there were a lot of infants and children buried at the “S” cemetery.

“I figured that there might be some special youth area or some type of selection towards children and infants at that cemetery,” Godde Chrisco said.

Godde Chrisco also conducted research to identify the age pattern for which descendants got buried at which cemetery.

“There was selection for putting individuals under the age of 18 years old at the ‘S’ cemetery.” Godde Chrisco said.

Godde Chrisco is trying to resolve a miscalculated time period that she found in some literature. There are some complications trying to identify the exact dates due to missing information that cannot be rediscovered.

“So where are you going from here?” asked Al Clark, professor of humanities, who attended the lecture.

“I need to sit back and let others re-interpret the site and find new information and put it out there… I am definitely not the end of the story,” Godde Chrisco said.