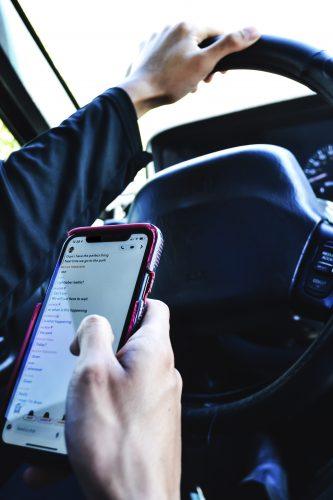 A new law goes into effect July 1 to bring stricter punishments for texting and driving in an effort to discourage distracted driving and cut down on accidents. Drivers caught using a cellphone while driving will be assessed an extra point against their driver’s license by the Department of Motor Vehicles, which could cause them to lose their licenses quicker with repeated offenses. / photo illustration by Kaitlin Handler

A new state law that goes into effect July 1 imposes stricter penalties for those caught texting while driving. Under current law, using a hand-held smart phone or device while driving is punishable by a fine. Starting July 1, the penalty for such violation will also add points to the driver’s record.

According to the National Safety Council, driving while using a cellphone has led to 1.6 million crashes each year, and nearly 390,000 injuries occur each year as a result from accidents caused by texting while driving. The report also finds that texting while driving is six times more likely to cause an accident than drinking and driving.

“It’s not a matter of how often …  it’s how often during the day,” Christian Baleonado, Los Angeles California Highway Patrol spokesman said.

“I personally know someone who passed away from a car accident of reckless driving,” Quintus Alton, said ULV senior sociology major. “I know what can happen when you’re not paying attention and on the phone.”

ULV legal studies professor Carolyn A. Bekhor said she uses texting and driving as an example when teaching her students about negligence.

“Every student can relate to it, they know about it, they often do it,” Bekhor said. “They also know the key part is that they shouldn’t do it.”

Bekhor said she hopes that with the new law in place, drivers will think twice before going on their cell phone while on the road.

“We balance the risks with various choices we have,” Bekhor said. “This is just another risk that we have to think about.”

Bekhor said that this new law will have the strongest impact financially on the insurance of drivers who choose to violate it. Enough violations can lead to a driver’s license being revoked, and that is a motivator for young drivers to stay off their phones, she said.

“A point is serious because it does mess with you getting other amenities later in life,” Alton said.

Bekhor said that she believes texting and driving has become part of our culture. She also pointed out the issue that not everyone can afford expensive cars with Bluetooth, for a hands-free and legal alternative.

“I’ve seen cops tap on a window to tell (a driver) to get off the phone and give them a warning,” Niccoli said. “There should be no ‘I’m feeling nice today’ from a cop when it comes to texting while driving.”

Alton said he believes law will help people understand the severity of texting while driving.

“You’re not looking at the road for whatever amount of time it takes for you to type a text,” Alton said “In that split amount of time, so many things can happen.”

“There’s no text or phone call important enough that you can’t wait to avoid that collision,” Baleonado said. “Don’t do it. It’s not worth it. It can wait.”

For more information on the law, visit the California Legislature website.

Taylor Moore can be reached at taylor.moore@laverne.edu.