By Armida Carranza, Sumiko Rudisky on February 26, 2021 in News 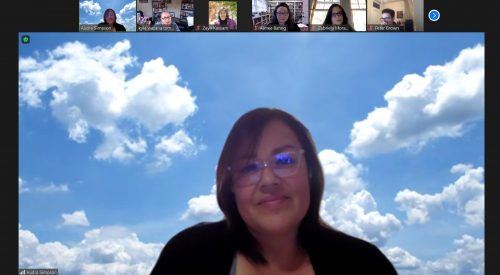 Audra Simpson, author of the article “The State is a Man,” explores Indigenous women, their bodies, and the challenges they face while crossing between Canada and the United States, at a Zoom lecture hosted by the Pomona College gender and women’s studies program Feb. 18. / screenshot by Armida Carranza

Simpson’s talk via Zoom focused on indigenous women in North America, about their  bodies and their struggles, which was also the focus of a recent article she co-wrote in 2016, titled “The State is a Man.”

Roughly 24 students and community members attended the event, where Simpson emphasized the importance of conveying what indigenous people cared about with what they were protesting, including legislation that would remove protections to land and water, among other issues.

The event was one of several virtual events this year hosted by the Associated Students of Pomona College and the College’s gender and women’s studies program.