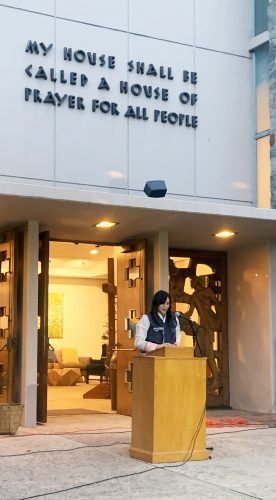 Rev. Jennifer Strickland speaks against hate crimes targeting the Asian American and Pacific Islander community in Claremont on Sunday to a crowd of more than 100 people at a vigil for the victims of the Atlanta shootings. / photo by Sumiko Rudisky

More than 100 people attended a vigil Sunday outside the United Church of Christ in Claremont – to stand in solidarity with the Asian American Pacific Islander community and against hate –  as hate crimes against the community have increased dramatically since the start of the pandemic.

On March 16, a white gunman shot nine people, killing eight in three different spas in Atlanta. Of the victims, six were women of Asian descent.

There have been 3,795 incidents of crimes against AAPI communities reported in this country between March 19, 2020, and Feb. 28, according to the Stop AAPI Hate National Report.

“Unfairly the result of this pandemic has meant that an entire race of people have been systematically and unilaterally blamed for the health outcomes in this country because of where we and our parents were born,” said Claremont City Council member and mayor pro tem Jed Leano, speaking at the Sunday event.

It is important to stop the AAPI hate and work together to bring peace, said the Rev. Jennifer Strickland of the Claremont United Church of Christ. Since the beginning of the pandemic Asian hate crimes have grown exponentially. This does not take in all of the other incidents that have not been reported to authorities, Strickland said during the Sunday event.

Those at the vigil, which began as the sun was setting, were given candles that were lit when it got dark. About five Asian speakers talked about their own personal struggles and family members’ personal struggles, including Leano and Strickland.

Several Claremont Police Officers also came out to the event to show support and encourage people to report any hate incidents to them.

As people were standing around listening to the speakers you could look around and see that they were engaged and hearing what they had to say.

“I needed to see other people show support, and I’m here to show support for the Asian community,” said Claremont resident Scott Jacobs. “ I wanted to learn and remind myself of everything that is happening.”

Standing up against hate is something that the country has been struggling against for many years, said former Claremont Mayor Peter Yao, who also attended the Sunday event.

The March 16 attack, which killed eight, was the largest gun massacre since the country went on lock down a year ago – until the March 22 mass shooting in Boulder.

“It is easy to point fingers at Donald Trump and the hateful race rhetoric that he used during the pandemic,” Strickland said. “The damage continues to ripple out and anti-Asian hate crimes have increased by 150% in the last year.”

At the end of the Sunday event, everyone raised their candles as they said the names of the victims from the Atlanta shootings, to remind us that we are all humans trying to live in solidarity together.

“It’s amazing to see everyone come out here in support, but wouldn’t it be great if we didn’t have to under these circumstances,” Leano said.