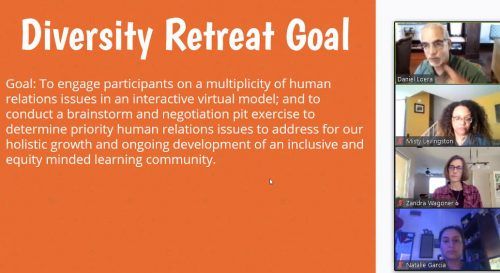 Because of the ongoing pandemic, the annual Diversity Retreat has been repurposed as a weekly series of conversations around gender identity, classism, sexual identity and much more between students and faculty online, sponsored by the Ludwick Center for Spirituality, Cultural Understanding and Community Engagement.

Before the COVID-19 pandemic, the participants in the retreat had the luxury of going away for a weekend. This year’s format of weekly sessions was designed to help prevent students from sitting for hours at a time in front of a screen.

“We call it a process because you’re never going to finish it, or be trained entirely, but you will continue to build awareness and knowledge about who am I and this construct of identity,” Daniel Loera, director of multicultural affairs, said.

Loera said that the website Nearpod allows the Diversity Retreat to stay interactive and to mirror a similar experience as if the retreat were held in person.

“They can actually have movement,” Loera said. “For example there’s a jamboard and… a multiple identity choice exercise… and everyone places their name on there and we’ll read statements out and people will actually move their name where they would go as if in person.”

Misty Levingston, associate director of multicultural affairs and Black student services and co-facilitator of the event, explained the importance and the benefits the retreat offers.

“Because we are so diverse, I think it’s important to just be open and aware,” she said.

Some students, who have participated in the retreat before, act as peer facilitators to help guide other students through the process.

“It’s about perspective and that each individual [participant] brings something different and these issues are being seen in a different perspective,” said Nestor Hernandez, senior religion major and peer facilitator.

The retreat consists of talking about different issues such as classism, gender identity, sexism, sexual identity and others. The goal of this dialogue is to create an open space for all participants to feel safe and vulnerable and keep those open conversations within the group.

One of the many goals of the Diversity Retreat is to help participants grow and become comfortable about all the issues discussed at the retreat.

Because of the emotional and vulnerable process involved, participants become part of a community that is formed and is a part of a group that has learned more about themselves.

Everyone is welcomed to participate in the Diversity Retreat – including traditional undergraduates, CAPA students, graduate students, and faculty and staff.

The Diversity Retreat will continue to have sessions from 2 p.m. to 4 p.m. on Fridays until April 23.

To sign up, visit ULV events on Campus Labs.