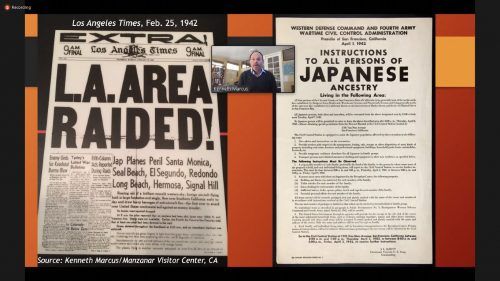 Marcus’s talk for the weekly faculty lecture series held via Zoom, was a part of a larger research project on World War II concentration camps and the memorialization of those camps.

For his research, Marcus has traveled to concentration camps in various countries.

He said he started the project shortly after he began teaching  at La Verne roughly two decades ago, when came across a file on the Japanese American internment camps. He began to interview survivors of those camps.

“There’s been much debate among scholars and camp survivors (over) what to actually call the camps,” Marcus said. “The war relocation authority during World War II called them relocation centers. Scholars and others have commonly referred to the camps (both) as internment camps and as concentration camps.”

He said  different terms for the people in the camps were used, such as “internees” or “evacuees.”

“Based on my discussions with camp survivors and their descendants, I’ve chosen the term ‘incarcerees,’ since those in the camps were incarcerated behind barbed wire,” Marcus said.

Discussing the origins of the camps, Marcus cited the attack on Pearl Harbor.

He said the war that seemed distant in Europe suddenly felt very much at home.

He explained that there was enormous fear of Japanese Americans among the public, the media and the government.

“Transferring that fear into race hatred going after Japanese Americans rather than, say, German-Americans or Italian-Americans is part of the genesis for these camps,” Marcus said.

He said that several executive orders signed by President Franklin Roosevelt made it possible for the military to remove anyone they deemed dangerous to the war effort.

He said there were 10 internment camps established across the United States at that time, from California to Arkansas.

He explained that Japanese Americans were first sent to assembly centers, including one in Pomona, before being sent to the internment camps, where the living conditions were appalling.

“Very few Americans actually spoke out against what was going on.” Marcus said. “Most Americans appeared to agree with it, which left a mark on those who were incarcerated that lasted for decades.”

He added that some churches, the American Civil Liberties Union, and a few others did speak out.

“It was an incarceration of over 10,000 men, women and children with no evidence of espionage or sabotage… based on fears, suspicions, rumors, innuendos and race hatred,” Marcus said.

Soomi Lee, associate professor of  public administration who attended Marcus’ online talk, asked about the link between racism and nationalism when it came to the American mindset at the time.

“When you combine those two together you can almost justify anything,” Marcus said.

Al Clark, professor of humanities, who attended the lecture added, “To remember terrible things about the past helps us to combat these in the present.”