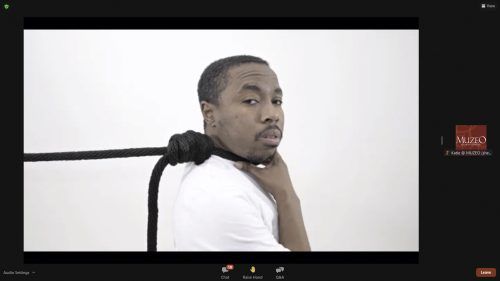 D. Hill, adjunct professor of photography, attempts to escape from a noose tied around his neck in his visual art performance, “Remove the Noose by All Means Necessary,” for Muzeo on Saturday via Zoom. / screenshot by Armida Carranza

The performance had 53 people in attendance.

Hill was inspired by Malcolm X’s 1964 speech at the founding rally of the Organization of Afro-American Unity, in particular the motto of the speech, “Freedom for the people by all means necessary.”

The video performance showed Hill dressed in all white and sitting on a wooden block in the middle of an all white studio. A black noose was tied around his neck and he attempted to remove the noose. He gasped for air as he attempted to remove the noose with the words “I can’t breathe” repeated. Once he removed the noose toward the end of the video, he was seen with the noose once again around his neck, as he collapsed to the floor.

Throughout the entire video, there were audio clips of news coverage and protests following the murder of George Floyd and the murder of Black transgender people in 2020.

After the video ended, Hill and Katie Adams Farrell, executive director of Muzeo, talked about the performance and took questions from the audience.

“The reason why I did this work was because I was fed up with the media bits and soundbites about how people like myself are being eliminated and erased, assassinated and murdered,” Hill said.

Hill said that historically the noose has specifically been used to eliminate Black people and that it is coming back in the 21st century as a symbol of elimination.

While Hill used a physical noose in the performance, he also talked about the idea of an invisible noose that does not seem to go away.

“So even though I was able to get out of the noose, I still felt the noose was there,” Hill said.

The lighting of the video also played an important role because Hill wanted to embrace his Blackness and wanted his skin visible, even when he played with shadows.

One of the scenes in the video showed the noose spotlighted on a wooden block with rapid movements.

“It’s the representation of Malcolm, so that was my vision of him wanting us to embrace our Blackness. I was trying to create this contrast of when he was speaking but I’m trying to insert myself into his moment,” Hill said. “It was about Blackness, but we’re still being spotlighted when it comes to what our moves or our intentions are.”

Hill said that time was an important component in the performance, especially with working in digital media.

“I believe what I do with my work quite a bit is make sure it exists as a single moment, as a motion of moments and as a live experience. That’s why I work in photography, video and performance,” Hill said.

Farrell said she has been a big fan Hill as both an artist and a person. She said this performance was exceptional.

“I thought it was beautiful and succinct, and moving and powerful and unnerving and uncomfortable. It was real,” Farrell said.

Farrell agreed with Hill about this being a perfect time to release the video.

“These conversations are so overdue in a mainstream way and to be able to speak about BIPOC experiences, there is no better time than now,” Farrell said.

Farrell said that making the performance happen with Muzeo was not an easy thing to accomplish, but that it was worth it in the end.

“It’s reinforced that Muzeo can have this role to provide a platform to local artists and to be an amplifier to underrepresented artists and messages,” Farrell said. 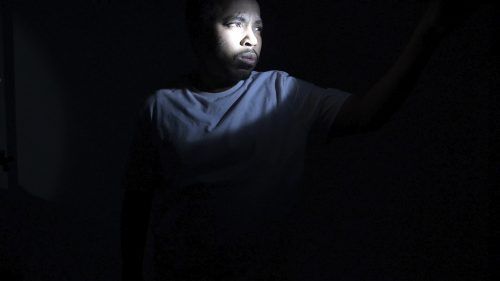 D. Hill, adjunct professor of photography, spotlights himself in order to show the color of his skin in his visual art performance “Remove the Noose by All Means Necessary,” for Muzeo on Saturday via Zoom. / photo courtesy of D. Hill

Correction
A photograph for the story “Performance explores the imagery and history of the noose” (March 5) was incorrectly credited to David Gonzalez. The photo is courtesy of the artist, D. Hill. The Campus Times regrets the error.