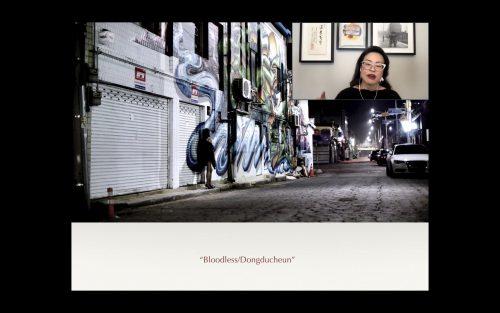 Grace Kyungwon Hong leads a discussion about the importance of virtual reality technology at the Phebe Spalding Lecture in Gender and Women’s Studies Feb. 24 via Zoom. Attendees viewed and discussed the short film “Bloodless” and analyzed the various VR effects used in the film. / screenshot by Melody Blazauskas

Professor Grace Kyungwon Hong analyzed the effects of virtual reality technology during the Phebe Spalding Lecture in Gender and Women’s Studies at the Pomona College on Feb. 24 via Zoom.

Hong, a professor of Asian American and gender studies and the director of the Center for the Study of Women at the University of California, Los Angeles, focused on the effects of virtual reality devices and their correlation to short films and the United States military.

Hong explained her interpretation of the short virtual reality film “Bloodless,” written and directed by Gina Kim, which highlights a young female sex worker in South Korea during the Korean War in the 1950s, whose life ended in a brutal murder.

“The film’s purpose was not just to portray her horrific death, but the moments leading to it, purposefully utilizing VR technology to give the audience a life-like experience,” Hong said.

Hong’s lecture gave a brief description of the movie but mainly focused on its realistic 360-degree immersive experience for the audience. There was no visual representation of limbs during the film which Hong described as a quintessential way to further portray the lack of control the main character must have felt.

Sanghyun Jean, who attended the lecture, asked how VR could be used to emphasize what the director wanted the audience to see.

“VR makes the film a little less in the director’s control,” Hong said.

She also explained the use of sound in the film – a sound in the watcher’s left ear, for example, would be used to make them turn in the direction the director wanted them to.

Hong also described the film as a way to expose the prominent sex work that happened frequently in the camp towns, where American officers would often stay during the war. While the work was technically illegal, it was often encouraged of young girls in order to keep the economic side of the towns running.

“Camp towns were a deathly state,” Hong said. “They were essentially half governed by United States army officials, and half by South Koreans.”

As Hong transitioned from the focus being primarily on the film, she suggested that virtual reality technology was also being used as a crucial instrument for the United States military.

“The use of VR in relation to war trauma is particularly important,” Hong said.

She said that in its early development by the United States military, VR was often used for training simulations and therapy treatment for those diagnosed with post-traumatic stress disorder.

“For years at Camp Pendleton North in California, VR had often been used to create hyper-realistic combat situations in order to enhance decision making and sharpen combat instincts,” Hong said. “They also used it to help in enforcing ethical decision making during combat where determining who is friend or foe is crucial.”

Nick Yi, another attendee at the lecture, asked about how VR was making strides within the world of technology.

“Before VR, 360-degree views were not possible,” Hong said.

She continued to describe its true capabilities, including on the ground versus in the sky views, and the opportunities those types of views brought for not just the military, but the movie-making industry as well.

While being used for creating combat situations, Hong explained VR has also been used for helping with PTSD. From standing on a platform mimicking explosions, to controllers shaped similar to weapons being provided, exposure therapy was the most frequently suggested treatment using VR systems.