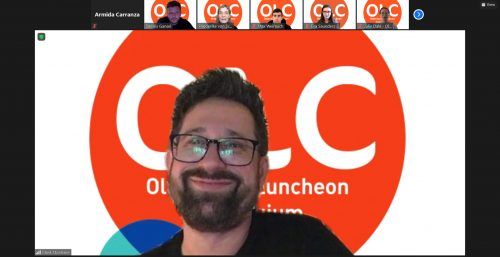 “We are the Wave” series director Mark Monheim speaks about the importance of young adult movements in media at a virtual event Saturday for Pomona College. / screenshot by Armida Carranza

Pomona College hosted a virtual talk that focused on the 2019 Netflix series, “We are the Wave,” young adult movements, and political activity and extremism, via Zoom Saturday.

The speakers, “We are the Wave” director Mark Monheim and executive producer Dennis Gansel, discussed what it takes to create such a powerful and moving series.

The series is based on the German novel “The Wave” by Todd Strasser, which looks at Nazism, among other such horrific movements in history.

“The Wave” is mandatory reading in school in Germany, Gansel said.

“I was fascinated to create a story that can depict what a group of kids can do (in a) political movement,” he said.

The series depicts a group of high school seniors starting a political movement.

Filmmakers, storytellers and educators across the world are addressing rising nationalist movements and are trying to warn the world to not let history repeat itself, the speakers said.

The Saturday discussion also touched on what goes into making a Netflix show and how the changing political climate influences series development.

Monheim and Gansel both said that they hope the series makes the younger generation aware of their power.

They said it is important to consider these stories in the context of what is happening in our world now.

“It made me realize how strong the culture of remembrance is in Germany,” said Niva Laurent, a Scripps College student. “It was really interesting how they adapted the movie.”