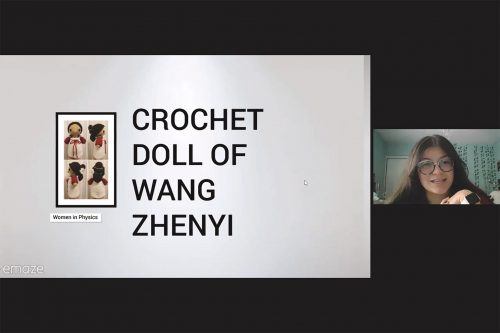 Melissa Ochoa, junior political science major and multicultural chair of the Campus Activities Board, displays a crocheted doll made by members of the Women in Physics club Tuesday at the Celebrating Herstory Through Art event on Zoom. The doll depicts Wang Zhenyi, a pioneering female scientist who worked in China during the 18th century. / screenshot by Rachel Kendrick

In honor of  Women’s History Month, the Campus Activities Board hosted a virtual art exhibition focused on women artists via Zoom Tuesday.

More than 30 people participated in the event, “Celebrating Herstory Through Art,” which was a presentation of artworks made by five clubs and organizations on campus: the Barkada Club, La Verne Buddies, Women in Physics, Alpha Omicron Pi, and Phi Sigma Sigma. The art featured included  music, short stories, paintings, drawings, and collages.

Students voted for their favorite piece at the end of the event.

Melissa Ochoa, multicultural chair for the Campus Activities Board,  and a junior political science major, organized the event.

“Women of all races have made amazing contributions to art,” Ochoa said.

Ochoa also gave a presentation based on exhibits currently at the National Museum of Women in the Arts.

“I felt like I was walking through an actual art museum,” said Kayla Yousef, junior psychology major.

Yousef added that these types of events are important for ULV. It is necessary to bring awareness to women’s contributions and achievements, she said.

Brienne Toyoshiba, junior physics major and president of Women in Physics, crocheted a doll of astronomer Wang Zhengyi for the art exhibition.

“She made enormous contributions to humanity by studying lunar eclipses and the force of gravity,” Toyoshiba said. “Zhengyi was also a big advocate of gender equality and commonplace education.”

The Barkada Club presented a virtual collage of Kumander Liwayway, who led a squadron of men during the Huk Rebellion in the Philippines in 1946, and defied stereotypes of women’s capacities to participate in government protests.

La Verne Buddies presented a recreation of Pablo’s Picasso’s “Women in a Hat and Fur Collar,” painted with acrylic on canvas. Picasso made this painting in honor of his lover Mary Therese Walter.

Phi Sigma Sigma aired a video featuring the Disney movie “Inside Out,” focused on the stereotypes women face every day, such as being deemed weaker or more emotional than men.

“I like how interactive this experience was,” said Natalie Garcia, junior sociology major. “It (allowed) students to … broaden our knowledge and cultural appreciation.”

Andrea Molina can be reached at andrea.molinamartinez@laverne.edu.