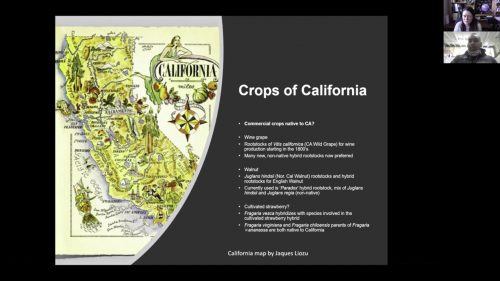 The California Botanic Gardens in Claremont held a virtual event discussing the history and uses of botanicals and California native plants earlier this month via Zoom.

Antonio Sanchez, nursery manager at the Botanic Gardens talked about how to use old Indigenous diet traditions and to integrate new ones to be more accessible to kitchens at home, during the March 13 event.

Sanchez said there are many plants that have been around for thousands of years but people are starting to use them now. Plants such as arugula and South African tea, have a long history in other parts of the world but are becoming more popular in California.

There are two types of grapes that are native to California, Vitis grapes and Desert grapes, Sanchez said.

“A while ago they used to graph the root stalks of the grapes and then put a French Chardonnay on top because it was more disease resistant and drought tolerant,” Sanchez said.

California is the destination for vineyards occupying large wine country groves all around the state, Sanchez said adding that most plants in California are no longer pure, but are forms of hybrids.

Sanchez discussed how the California native plants in the Mediterranean region of California, west of the Sierra Nevada Mountains and southwest of the Oregon Klamath Mountains,  should be planted during the rainy season.

“The rainy season for our plants is from November to about March,” Sanchez said.

Sanchez also talked about how foraging is part of the process of integrating botanicals, but people should do so without foraging and propagating from someone else’s land.

“It is important to respect the Indigenous land because they had their land stolen from them.” Sanchez said.

Sanchez also warned the audience to be careful of eating some botanicals because they can be poisonous.

Cari Daly, a Riverside resident attending the meeting, asked Sanchez about the amount of time it takes for Miner’s Lettuce to germinate. Sanchez said it does not take long at all.

“The rule of thumb for most seeds and especially for Miner’s Lettuce is to lightly bury it. Place it on the surface and water it very little,” Sanchez said.

Miner’s Lettuce, scientifically known as Claytonia Perfoliata, is delicate in its appearance and has a subtle sweetness and earthy flavor.

Matthew Hecht, resident of Westchester, asked about the difference between Sambucus Nigra and Sambucus Mexicana.

Sanchez said that people mistake them as two different things when in reality they are the same plant.

Sambucus is a genus of flowering plants in the family Adoxaceae and it is also commonly known as Elderberry which helps strengthen the immune system.

“Scientists do DNA work to figure out what plant is which and the name Sambucus Mexicana is no longer used and only known as Sambucus Nigra,” Sanchez said.

Barbara Hodges, a San Jose resident, asked to elaborate on the Chia Cafe that Sanchez mentioned.

Sanchez said the Chia Cafe is an organization that is dedicated to protecting Indigenous land in Southern California. They educate on the gathering and harvesting of native plants. On the Chia Cafe’s Facebook page, they state that protecting and restoring California native plant communities and environments, while advocating for native plant landscapes on public and private spaces is a big goal of theirs.

“They are a group of people of all backgrounds that put out native recipes and share traditional stories in a cookbook,” Sanchez said.

Sanchez wanted to thank all of the Native Americans for educating him on the history of native botanicals.