By Abelina Nunez, Kaitlyn Handler on April 2, 2021 in LV Life 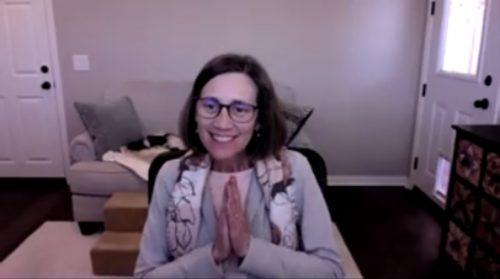 University Chaplain Zandra Wagoner brings the community together as she holds the Grief and Gift virtual gathering March 24 over Zoom to acknowledge the impact of the past year. Participants shared their reflections on the pandemic, hate crimes and political turmoil in the United States. / screenshot by Kaitlin Handler

The Associated Students of the University of La Verne had a gathering called Grief and Gift to acknowledge the pandemic’s impact within the past year while also treasuring today’s gift and expressing hope for the future. The event took place March 24 via Zoom with 34 participants.

Participants spoke about their griefs and the gift that comes with grieving.

“It has been a traumatic year, and we want to offer the grief that comes with that,” Zandra Wagoner, university chaplain, said. “We are gathered in community to share these griefs and be able to hold them in our hearts.”

“Grief is very different and looks very different to many people,” Itzia Chavez, senior psychology major and ASULV member, said. “For me, grief looks like a mix of emotions from sadness to rage to anger or a lot of frustration.”

Chavez’s senior year college experience was something she lost due to the pandemic. She said she was frustrated that it took an entire pandemic for people to recognize what is happening  around the world and notice that her friends are hurting due to their skin tone, ethnicity or race.

“I’m saddened by the continuation of the losses and the hate crimes that’s going on as I speak right now but I can only hope that we continue to educate each other, respect on each other, and love on each other to really make an impact,” Chavez said.

Chavez said she has been using breathing techniques and stress balls to help with her anxiety. She would also walk to the mirror and look at herself and take a deep breath to center herself.

“The greatest grief is the loss and losses you can’t say goodbye to in terms of any kind of ceremonial way,” Al Clark, professor of humanities, said.

Clark’s gift was that the pandemic was able to have a dramatic, positive change not for himself but for society and its needs.

Sarah Morales, senior social science major and ASULV president, said she grieves those relationships she never got to build and the ones that suffer throughout the year. Morales’ said her grief can appear as exhaustion or anger.

“It was also hard to keep faith in this year, and I do grieve a little bit of loss of faith, of just believing in other people,” Morales said. “It was just very challenging to continue to hold that when you’re just in the face of so many negative situations that are sometimes in our control and sometimes are not in our control.”

“The major gift was understanding that even the most pure and evil things come from everything which is love,” Nicholas Montecino, junior political science major and ASULV senator for the College of Arts and Sciences, said.

Montecino said that the pandemic has slowed his life in such a way where it has allowed him to self-reflect.

“The grief is all the suffering but the gift is the clarity and the vision of who I want to be and where I want to go as we move forward with our lives,” Terry Dopson, student employment coordinator, said.

“For me, the biggest gift has been self-development and self-improvement with myself,” Nadeen Mohammad, freshman biology major and ASULV member, said. “I’ve realized true happiness comes from the little things, and I take every day as a gift, and I’m learning that not every day is promised.”

Abelina Nunez can be reached at abelina.nunez@laverne.edu.