By Jorge Martinez, Maddie Ybarra on April 2, 2021 in News 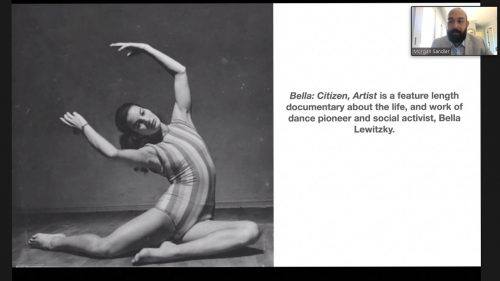 Morgan Sandler, associate professor of digital film production, shared his experience filming a documentary about Bella Lewitzky on Tuesday at the faculty lecture held via Zoom.

“Bella, Citizen Artist” is a film about the life, influence and impact of artist Bella Lewitzky, a modern dance choreographer, dancer, teacher and activist.

In 1946, Lewitzky founded Dance Theater Los Angeles. Later she founded the dance program at the California Institute of the Arts.

She spent most of her life in Southern California, though had a New York City debut when she was 56. She danced into her 60s.

Sandler said he went into the documentary project with no prior knowledge of Lewitzky.

“Week by week, I became invested in her life story, (soon) I was crying in the interviews,” Sandler said. “I felt like I got to know her during this process, and it was inspiring. This made me motivated in how I shot these interviews with people that she knew.”

Sandler said that he did not want to paint Lewitzky as delicate in the film.

“It was important to show her being a teacher (and) show the sides of Bella, and this is a tribute,” said Sandler.

Lewitzky took in the homeless and became an activist, Sandler said.

Dion Johnson, director of art galleries who attended the Zoom event Tuesday, said he related to Lewizky’s work as an educator.

“I feel that there is a vital connection in performance, activism and her voice being heard,” Johnson said.

Sandler said he hopes the film will be released this summer.

Jorge A. Martinez can be reached at jorge.martinez4@laverne.edu.