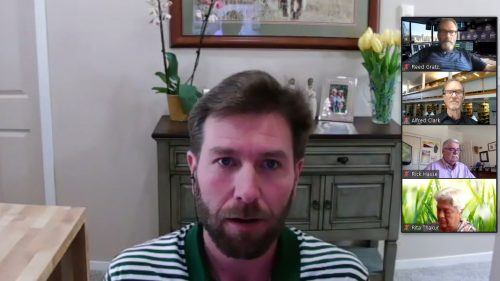 Eric Riehle, La Verne’s men’s and women’s golf coach, shares his experiences and the connections he has made as a coach Tuesday in his last faculty lecture via Zoom. Reed Gratz, professor of music; Al Clark, professor of humanities; Rick Hasse, instructor of accounting and finance; and Rita Thakur, associate dean of the College of Business and Public Management, listen to Riehle as he talks about his time at La Verne. / screenshot by Maddie Ybarra

Eric Riehle, head men’s and women’s golf coach, talked about the lessons he has learned as a coach and how he plans on applying them to his future career plans beyond the University of La Verne on Tuesday during his lecture titled “My Last Dialogue,” via Zoom before a virtual audience of about 20.

Riehle said one of his strengths was his willingness to improvise.

“Improvisation … works well, and one must know how to use it,” Riehle said. “I took underdog teams and made them come back.”

Riehle also talked about his recruitment process at La Verne and how he brought talent from all over the world.

He said that in his recruitment process he also considered students’ charisma and personality.

“I think one of the biggest things to remember about him is students’ mindsets comes first.”

Riehle said he is not sure exactly what his next chapter will be, but he added: “I got some ideas to fix the community.”