By Emily Alvarez, Sebastián Abdon Ibarra on May 21, 2021 in Baseball, Feature Slider, Sports 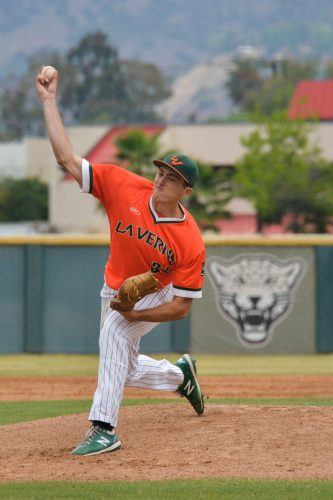 La Verne sophomore pitcher Gerald Terry started game one of the doubleheader Saturday against Redlands. Terry earned his first win of the season after pitching five innings, allowing two earned runs, and striking out six batters. The Leopards beat the Bulldogs, 14-8, and swept the doubleheader to finish the pandemic-shortened season at 4-5. / photo by Emily Alvarez

After dropping the first game of their series in Redlands on Friday, the Leopards sent their seniors off triumphantly by winning both games of the doubleheader on Senior Night on Saturday. It was the first series win for La Verne on the year and put their final record at 4-5 for the pandemic-shortened 2021 season.

La Verne lost the first game, 9-7, as a result of the same bullpen struggles that has plagued the team all season.

This was the third game of the year that the Leopards lost after entering the seventh inning with a lead. This does not include the game last week against Cal Lutheran where the bullpen squandered a 6-0 lead by allowing eight runs to score in the sixth inning.

Cameron Slessor, freshman third baseman, and Adam Santa Cruz, senior catcher, drove in five of La Verne’s seven runs of the day, with Slessor getting all three of his RBIs on his first home run of the year.

Sean Holt, junior starting pitcher, showed again why he is the ace of the pitching staff, allowing one earned run over 4.2 innings. He dropped his ERA to 2.41.

Santa Cruz said the opportunity to have a season when it did not seem likely was an important moment for the seniors. He had already delayed taking courses in order to preserve his eligibility. Next season he wouldn’t have any courses left to take, so he could not even play if he wanted to.

“It means a lot to be out here. From the fall semester to now we have been working out, trying to get our new guys ready,” he said. “Half our team is freshmen, whether it be new freshmen or COVID freshmen. To be able to get out here and work on everything that we did work on was just fun. Even though it is only nine regular season games and a guaranteed two games in the tournament, I am so happy to be out here. I was telling them if we can just get to practice I would be happy. So it is awesome to be able to be out here.”

The Leopards got off to a fast start in game one, batting around in the first inning and scoring four runs. The offense was relatively quiet for the rest of the game until they put up crooked numbers in the sixth and eighth innings. The eighth in particular swung the game completely in La Verne’s favor. The Leopards were nursing a one-run lead entering the bottom of the eighth inning. It was important for the offense to score some insurance runs considering the performance of the bullpen. They answered the call, putting up six runs, capped off by a three-run home run by sophomore center fielder Tanner Siffert.

“Coming into this thing you know where you are as a team. We’re young in a lot of places and we haven’t gotten a lot of help out of our bullpen. We’re trying to score as much as we can,” head coach Scott Winterburn said.

Winterburn said the team is not quite where they want to be on the mound. He said he meant no disrespect toward his pitchers, and that he understood the quick turnaround of the season meant they are not in midseason form.

Gerald Terry, sophomore starting pitcher, had his best outing of the season. He went five innings, giving up two earned runs and striking out six. Bergan relieved him, but was removed in the ninth after loading the bases. Lawson secured the final three outs, only letting one inherited runner score, to secure the win for La Verne, 14-8.

Terry was the winning pitcher, while junior Cameron Kundig was the losing pitcher for Redlands.

The Leopards won game two, their final game of the regular season, 11-7, thanks to another big game from the offense and two pitchers performing good enough to not give up the lead.

Offense has not been a problem for La Verne this season. The Leopards are averaging 7.9 runs per game, and have scored at least six runs in seven of their nine games. Eight different Leopards drove in a run in a game where they were fully in control the whole time.

Jaylon Fong, freshman starting pitcher, and Aguilera combined to pitch the whole game. Fong would give the Leopards a quality start, going five innings while only giving up two runs. Aguilera got knocked around a bit, but still managed to pitch the final four innings for the save.

Fong picked up the win and freshman Julian Zuniga was charged with his second loss of the season for Redlands. 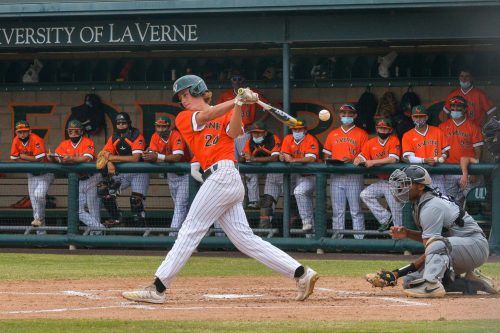 La Verne freshman third baseman Cameron Slessor battles through a prolonged at bat in the bottom of the first inning of the first game of Saturday’s doubleheader against Redlands. He then blooped a single to center field to bring in La Verne’s second run of the inning. It was one of his three hits he had in the game, including two triples, to go with his three RBIs. The Leopards beat the Bulldogs, 14-8, and swept the doubleheader to finish the pandemic-shortened season at 4-5. / photo by Emily Alvarez