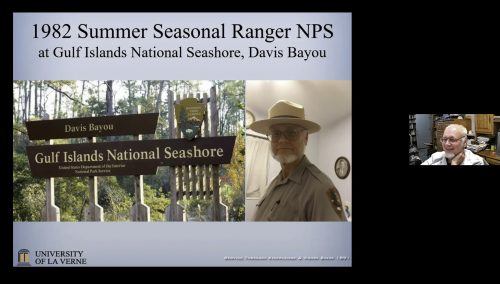 Jay Jones, professor of biology and biochemistry, recounts his time as a summer seasonal ranger in the National Park Service at the Gulf Islands National Seashore in Mississippi at his final lecture Tuesday via Zoom. Jones’ lecture, which included stories from throughout his 35-year career at the University of La Verne, was part of the weekly faculty lecture series. / screenshot by Armida Carranza

Jay Jones, professor of biology and biochemistry, held his last lecture after being with the University for 35 years on Tuesday with 60 people in attendance.

Throughout his lecture, Jones talked about his position at the University and his early childhood adventures that made him raise questions on nature, making him curious to the point where he made this into a career. Since Jones came of age in the 1960s, he also talked about growing up during the Civil Rights Movement.

“I got to see first-hand segregation, and the way change was made so quickly was fascinating,” Jones said.

Jones also recalled the work of Julian Bond, a leader in the Student Non-Violent Coordinating Committee.

“Bond worked closely with Martin Luther King, and that the magnitude of the Civil Rights Movement was not all that different from the environmental challenges we have been facing,” Jones said.

Jones was mentioned growing up during the Vietnam War, so it was a big influence pushing him forward to getting a biology and biochemistry degree. In addition to that, he worked on several rocket projects in his basement and grew up with amateur radio and a TV when he was about 9 years old.

“This gave me the power and confidence to work with instruments and repairs. It gave me confidence to embrace computer technology,” Jones said.

After Jones graduated from high school, he attended what he said was the cheapest school in his state, Southern Illinois University, because it was the height of the Vietnam War. During this time Southern Illinois had low tuition, no loans and all of his textbooks were rented, so he said he paid about $9 total per year. He also mentioned the whiffs of tear gas from nearby anti war demonstrations when he was going to class or to work.

Throughout his years, Jones got to work at many research centers and laboratories across the globe, including the ARCO research center in Plano, Texas, for a period of time.

Jack Meek, professor of public administration, attended to congratulate and thank Jones for all his hard work.

“Jones had an amazing career and contribution to La Verne; I want to thank him for all his thoughtful guidance and leadership. We all benefited from his interest in so many areas,” Meek said.

Reed Gratz, professor of music, was also there to recall the great times he had with Jones on campus.

“Our friendship means so much to me. Our chats in our offices, on campus, seeing you at so many of our concerts, your support of me and our music department are greatly appreciated,” Gratz said.

Sharon Davis, professor of sociology, thanked Jones for all his hard work and dedication to the University.

“Thank you, Jay, for sharing your lucky life with us. You have been a great colleague, friend, intellect, and campus leader. You are already missed,” Davis said.