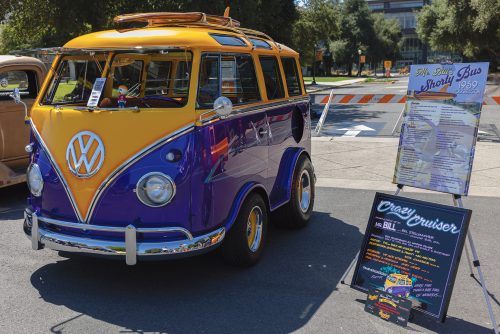 A blue and yellow 1959 Volkswagen Deluxe 23-window bus owned by Bill Stellmacher of Diamond Bar was one of hundreds of classic cars displayed at the 27th annual Cool Cruise Car Show on Saturday in downtown La Verne. The event featured more than 800 classic cars dating back to the 1930s, as well as food, music and other family activities. / photo by Jingyao Liang

The city of La Verne’s 27th Cool Cruise Car Show was back Saturday after a few COVID-related postponements, featuring cars from 1928 Ford model A’s to 2020 Corvettes.

Absence seemed to increase excitement for the event at Bonita and D streets in downtown, with about 800 cars in all.

The event taught some observers how these owners build and restore the cars and how they can get involved into it.

The event features cars for cruising, cars specifically designed for a race track, with in mint-condition from the engine to paint.

The top 40 cars at the show won awards.

Some of the car owners were part of car clubs where they all go to shows or cruise the streets.

“We are thrilled to be able to bring this event back to the city of La Verne, which is a community I have known and loved for many years,” said Craig Hoelzel, the event organizer.

“This event is big for us because it represents the 40th anniversary of DeLorean history,” said Roland Hoffman of Norco, president of DeLorean Owners Association.

The DeLorean is featured in the movie “Back to the Future.” The show featured three refurbished DeLoreans.

“These cars are a rare find and there are only 6,000 left and we have a group of them throughout Southern California,” said Todd Bustillo of Norco, a DeLorean tech.

“I enjoy coming to this event because it allows me to see the way people build these cars and I am able to document them,” Koby Wong of Glendora, a local photographer, said.

Connor Woken can be reached at connor.woken@laverne.edu.