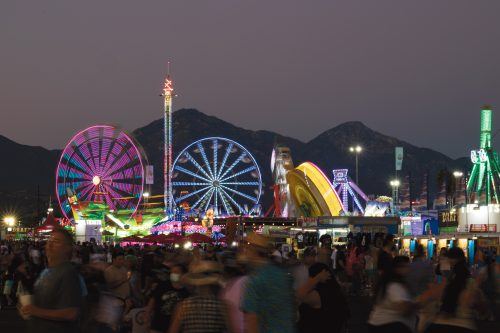 The Bite-Sized Fair, a miniature version of the Los Angeles County Fair, where residents can join carnival rides, games, shopping and various food options at the Fairplex in Pomona, runs every weekend through Sept. 26. The annual Los Angeles County Fair will move from its usual fall schedule to a spring schedule starting in May 2022 with a celebration of the Fair’s 100th anniversary. / photo by Brady Keegan

The Los Angeles County Fair returned as the Bite-Sized Fair on Friday – after being cancelled last year – as a smaller version with a limited number of rides, games, food and shopping. The new Bite-Sized Fair, which runs from 3 p.m. to 9 p.m. Friday through Sunday until Sept. 26 at the Fairplex in Pomona, enforces face masks, social distancing and a capacity limit each day with health and safety risks in mind due to COVID-19.

Admission is also smaller this year at $2, as opposed to 2019 where admission was $15. Children aged 2 or younger do not need a ticket. $10 to $15 parking passes must be purchased online by noon the day of the event, no ticket sales at the gate this year to enforce a limited capacity.

“It is a lot smaller than what the L.A. County Fair is, but it’s still a lot to see and a lot of fun,” Farraj said.

The Bite-Sized Fair features its usual crowd favorites including rides like the Zipper, Twister and Insanity 360, and snacks like funnel cakes, ice cream and kettle corn.

Visitors played games to win a prize or stopped by the shop stands to take a look at handmade clothing, Hispanic cultural footwear, jewelry, organic beauty products and more.

Some sang along and shopped Thump Records On Wheels’ t-shirt collection, vinyls and CDs as they played hits by Zapp and The Notorious B.I.G.

“It’s obviously in a different form but to me, it’s better than nothing,” Tiffani Iszard of T. Monique Boutique said. “People get to get out, they get to be with their families and have fun locally. You don’t have to go places. It’s safe. Everyone’s wearing masks. I’m happy that it’s back. I’m glad they decided to do something.”

This year marks Iszard’s seventh year selling her boutique’s clothing at the Fair.

Iszard said she has not vended since February 2020, but she typically sells her clothing at different events such as rodeos, jazz concerts and raves.

However, at the Fair, she said the people interested in her clothing make up a more diverse group than at other places.

“The demographic for my clients is really a wide range. It’s from age 18 to 75, which is crazy,” Iszard said. “I helped a lady earlier who told me she just turned 67 and she bought some cute stuff. So I have (customers) all over the map.”

More people arrived at the fair as the sun started going down around 7 p.m., loosening up and visiting the dance area. Some took a break from the crowd and sat to share a turkey leg while others turned to the Ferris wheel for a sunset view of the city.

“I think people are kind of desperate to get out and get that hint of normalcy again, and … buy good food and drinks, but it’s slowed down of course. We’re a quarter of the size of what we normally are,” Farraj said.

Sissy Bautista, Ontario resident, said she thought the Fair was fun regardless of its smaller size, the rides being her favorite part.

“I thought it was more fun. Everything was compact and less crowded,” Will Sung, resident of Fountain Valley, said. “I liked all the rides and the food was good. So many choices.”

Jesse Castillo and April Swoboda, residents of San Bernardino, said they decided to attend the Bite-Sized Fair on its opening day spontaneously, but they do visit the full-scale Fair every year.

“I think it’s a little bit less fun since there’s less things going on and not as many stands,” Castillo said.

Castillo and Swoboda said that the Bite-Sized Fair should have had more games available, but agreed that the food was good. Swoboda said her favorite snack of the night was the deep-fried Oreos.

“Hopefully people still come out and enjoy the smaller Bite-Sized Fair, have a good time and be safe until we are all able to get on the same page and be back to normal again,” Farraj said.

The team is already five months into planning the annual Fair’s big return on May 5, 2022, to celebrate its 100th anniversary and will continue to be held in May instead of September in an effort to avoid the summer heat.