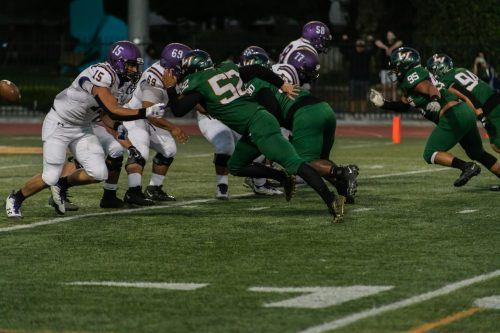 The Leopards’ defensive line – led by senior Derek Shay (No. 52), senior Khary Sanders (No. 90), freshman Austin Marin (No. 95) and freshman Brandon Pedorza (No. 94) – strongly pressured the Poets offense, denying them any points on Saturday at Ortmayer Stadium. The football team dominated in its season opener, beating Whittier 42-0. The Leopards will pursue another win on the road against Chapman at 7 p.m. Saturday at Chapman Stadium. / photo by Shira O’Neal-Abend

The La Verne football team blew out the Whittier Poets, 42-0, in their season opener, Saturday at Ortmayer Stadium.

The Leopards’ defense stayed strong throughout the game, focusing on man-to-man coverage. They forced four turnovers which included three interceptions and one fumble.

“The guys prepared really well in terms of studying the film, being focused and engaged in practice, and preparing for this moment,” said James Stewart, assistant head coach and defensive coordinator.

The Poets had good field position during the first quarter, however the Leopards’ defense remained tight, not allowing any points.

With about eight minutes remaining in the first quarter, La Verne senior cornerback Raymond Moronez intercepted the Poets’ sophomore quarterback Andrew Henriquez’s pass attempt, taking the ball to the Leopards 49 yard line. However, the Leopards could not capitalize,  giving possession back to the Poets.

On the Leopards’ third drive of the first quarter, they pressed into Poet territory, creating  first and goal. Leopards sophomore quarterback Miguel Aguero Jr. rushed seven yards for the touchdown. After that, the Leopards successfully completed a two-point conversion with Aguero passing the ball to sophomore wide receiver Jonathon Torres, putting the Leopards on the board, 8-0.

Early in the second quarter, the Poets made their first appearance in the red zone, though the Leopards held them to a field goal attempt. The ball was spotted on the 16 yard line and Poets junior kicker Noah Handel hit the upright, keeping the score 8-0.

With 10 minutes remaining in the second quarter an Aguero punt was blocked by the Poets’ defense, who recovered it at the Leopards’ 14 yard line.

The Poets were given a big opportunity to put some points on the board. But the Leopards would strike back quickly when senior linebacker Derek Guzman intercepted Henriquez’s pass at the goal line, returning it down the field. Guzman fumbled but Leopards senior wide receiver Nathaniel Sagastume recovered the ball and ran it into the end zone.

The referees called the ball down when Guzman dropped it at the 34 yard line, causing the touchdown from Sagastume to be no good. Leopards freshman running back Ezra Tom Hoon then broke through the pocket and found himself in the end zone for a touchdown to complete the drive. After the good extra point by freshman kicker Kapena Kamakawiwoole, the Leopards were up, 15-0.

The Leopards have a young core and Sagastume thinks it was a good start to the season.

“We have a lot of new people and with that I think we did well for our first game” Sagastume said.

After five minutes of multiple drives from each team, the Leopards gained possession and Aguero threw deep to wide open senior wide receiver Spencer Pool, who charged into the end zone for another touchdown. The extra point was good, making the score 22-0

The second half began with Leopards senior quarterback Tyrone Williams Jr. taking over for Aguero to make his La Verne debut. Williams is a transfer from Azusa Pacific University.

About four minutes into the second half, Leopards freshman linebacker Vitale Afoa picked up a fumble from Poets senior wide receiver Moises Gonzalez and took it down the field for a touchdown to increase the Leopards’ lead to 29-0.

After another unsuccessful drive from the Poets, the Leopards were in possession again. Williams handed it off to freshman running back Abel Cueva, who pushed the Leopards down the field with a gain of about 35 yards. Williams then performed a quarterback keeper which put the Leopards up, 36-0.

“I was really proud of our guys being able to come through in week one and show them what we were waiting for,” Williams said. “This is something we have talked about for 600 days now, since last season got canceled.”

Moving into the fourth quarter, the Leopards put up one last attempt to score. Williams passed the ball to Cueva who was then swarmed by the Poets’ defense. Cueva would break through to rush 30 yards for a touchdown.

The Leopards attempted another two point conversion but were unsuccessful, keeping the score, 42-0.

In the final minutes, the Poets tried another field goal attempt at the 21 yard line but ended up coming up short, sealing the win for the Leopards.

“We have to file this one away in the games of the past,” head coach Chris Krich said. “It doesn’t really matter what we did this last week, it’s how we prepare for the upcoming weeks.”

The Leopards will hit the road against Chapman on Saturday for their road opener at Chapman Stadium, with kickoff at 7 p.m.