By Jacob Barriga, Shira O’Neal-Abend on September 10, 2021 in Soccer, Sports 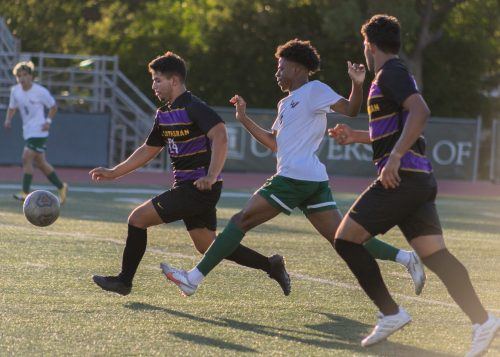 Leopard junior midfielder Owen Osagiede attempts to take the ball from Cal Lutheran senior midfielder Justin Magana during the Leopards’ 2-0 loss to the Kingsmen on Sunday. The Leopards play George Fox and Whitman this weekend before beginning conference play next week. / photo by Shira O’Neal Abend

The Leopards played strong defensively on Sunday, especially in the first half with a bend-don’t-break attitude as the Leopards held off 12 Kingsmen shots in the half without surrendering a goal.

But the big blow for the Leopards came just before halftime when a Kingsmen cross into the box found the outstretched arms of Duenas. The saving dive took Duenas into the knee of a streaking Kingmen forward looking to finish the cross. Duenas instantly lost consciousness and was carted off by an ambulance to receive treatment.

“It’s heartbreaking to see that happen. He’s going to bounce back and we can’t wait to see him out there,” head coach Trevor Persson said.

Duenas is expected to be out for the season.

The Leopards came out of halftime stiff on the defensive end but they still could not make many runs at the opposing defense throughout the game.

The lack of pressure from the Leopards gave the Kingsmen confidence in their attack.

Cal Lutheran freshman midfielder J.P. Melgoza took a 36 yard shot that would bounce off the crossbar out of reach of La Verne’s replacement goalkeeper, sophomore Brandon Castro. The Leopards failed to clear the ball, which immediately turned into an opposing cross into the box and a header by Kingsman senior midfielder Christian Gonzalez which gave Cal Lutheran a 1-0 lead in the 55th minute.

Confidence only grew for the Kingmen as they continued to penetrate the Leopard defense and shoot two more shots with little resistance before senior forward Juan Valencia finished a 20 yard chip shot off of another failed Leopard clearance attempt, giving Cal Lutheran a 2-0 lead.

This proved to be the end for the Leopards as a counter attack never mounted nor threatened the Kingsmen defense by the time the clock expired.

This year’s squad is full of inexperienced players but senior forward James Coe said the season-long goals for the team remain the same.

“We are getting these mistakes out now and we can improve on them. Once that first goal comes they all will start coming,” Coe said. “We plan on making the top four in the conference to get into the tournament and win the SCIAC.”

Junior defender Brian Martinez said the Leopards are sticking with their game plan and intend to make a run going into conference.

“We want to keep the ball in front of us and keep a clean sheet each game, this team is going to be super special,” Martinez said.

Freshman goalkeeper Logan Reese believes the team is on the verge of being a great one.

“Our defense is great, we are communicating and keeping attackers away from the goal. We just need to connect more on offense and just  put the ball in the net,” Reese said.

Coach Persson understands this group is inexperienced and he wants to use it to their advantage.

“We are always the underdog and we like that. We are excited because of all the unknowns and we are excited to get these new bodies on the field,” Persson said.

The loss to Cal Lutheran came after a season opening 0-0 draw in double overtime Saturday against San Diego Christian.

The Leopards travel to UC Santa Cruz to face George Fox and Whitman this weekend before beginning conference play at 7 p.m. Wednesday at home against Whittier.