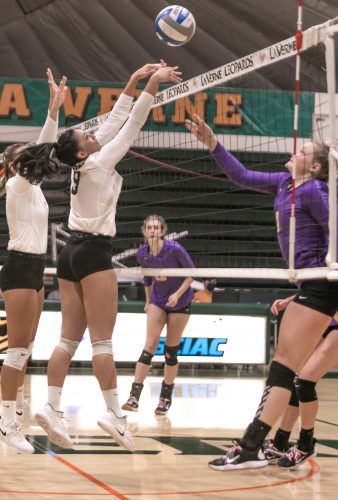 The women’s volleyball team was swept by Cal Lutheran’s tips in all three sets during Tuesday’s game.

Freshman outside hitter Noelani Soma said the Leopards could not maintain a strong defense against Cal Lutheran.

“Honestly, we were on our heels on defense and we were expecting them to swing hard,” Soma said. “I don’t think our back row girls were expecting tips from Cal Lutheran.”

In the first set, Cal Lutheran had an early 4-0 lead on La Verne.

ULV tried to catch up by scoring four points from Cal Lutheran attack errors. But the women fell short in the first set, 25-17

“Overall, I feel like we weren’t as mentally prepared as we thought we were and came into the game with a slower start,” Smith said. “It was difficult for us to play defense and to keep the ball in play for our team.”

La Verne had its first lead of the night in the second set, 4-3. But La Verne dropped a few points behind Cal Lutheran when quick tips caught the Leopards off guard.

After head coach Jeff Hendershot called a timeout, Smith saved a tip and helped her team score a point, making the score 16-12.

“I personally struggled with getting the tips most of the time because of how short and fast they were, which made it difficult to get them up,” Smith said.

Toward the end of the second set, Soma’s kill helped close the gap for her team, 18-14.

During the third set, the Leopards came back to tie the game at 10-10. But the team could not break away from Cal Lutheran’s offense, which scored seven points in a row.

Ayana Mier, junior outside hitter and right side, led the Leopards with 10 kills.

“It feels good,” Meir said. “But I feel like I could always do more to help my team. I didn’t do enough to help us secure a win against Cal Lutheran.”

Mier said she believes fans have not seen the team’s best abilities on the court.

“We definitely still haven’t played our best volleyball we know we can play,” Mier said.

Soma said the lesson the team needs to take from Tuesday’s game into their next conference game is simply communicating louder with teammates on the court.

Mier had a different opinion of how the team should prepare for their next conference match. She said the team needs to maintain a good mental state before and during the match.

“Our team needs to just go in there and play our game the way we usually play, stick to our training,” Mier said. “We just need to calm it down and not let the game get too big.”

The team will travel to Pasadena to face Caltech at 7 p.m. Friday.