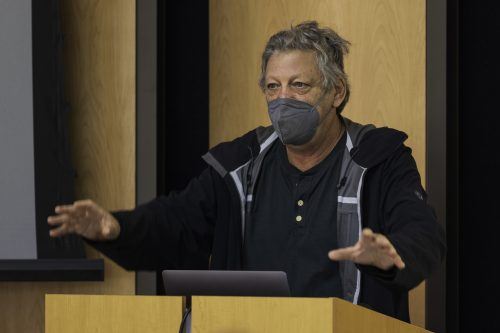 Antonio Turok, photographer and author, talks about the history behind the photographs he took while documenting Indigenous revolutions in Mexico and Central America on Monday in the Sacred Space of the Ludwick Center. During the talk, which was held in honor of Indigenous People’s Day, Turok brought to light the realities of war and injustice faced by Indigenous populations. / photo by Brady Keegan

Turok has traveled for decades across Central America and Mexico for taking photos. His main driving force has always been to find common goals between cultures and bring people together.

As the presentation began, Turok asked the audience to take a deep breath and watch the slideshow of photos come across the screen. He asked that everyone be open to the spiritual sense of life and death in each one, each depicting a different sense of aliveness.

The first group of images was titled “Chiapas” which showed religion, spirituality, war, dance, poverty, struggles and accomplishment, and a clear sense of uncertainty.

The next group was titled “Oaxaca” which also showed war but the injustice, faith uncertainty and death that came with it.

Even without the colors of the photos, it was as if they were more vibrant than the originals could have been as emotions all across the spectrum came through with each new image.

After the slideshow, Turok asked the audience if any specific pictures stood out to him. One audience member called out the picture of the young dead girl laying in her coffin, wrapped up and being mourned by the entire village around her. The image was titled “Niña Muerta,” which had been the continuation of the previous image, entitled “Niña Desnutrida,” where she had been held in pain, two hours before the second photo.

Turok explained how many people may believe these images to be old or far from home on first inspection, but in reality many of them were recent photos, taken right across the border or “in our own backyard”.

He explained that he presented his photography in black and white instead of color since most of the time the color would make the images too grotesque, that the drama of an image would be seen differently and take away from the actual sense of what was happening in the photos.

Another audience member said they remembered the image titled “Doña Chole ” which illustrated two women being shaded under a parasol by their Indigenoius shofer, lover, and servant to any other wishes they commanded. They both were notorious for selling bras and underwear to the local people, pushing their beliefs that they needed these items. Their blatant racism to the Indigenous people was ironic, Turok said, since they also lived off of them but looked down on them so much.

“You can’t be afraid if you want to evoke change,” Turok said at the end of the presentation.

He said that by simply looking to the sky, we could relieve ourselves from the type of cockroach-like nature we have so often fallen to, all we have to do is believe in our own power to create change and improve our society together.