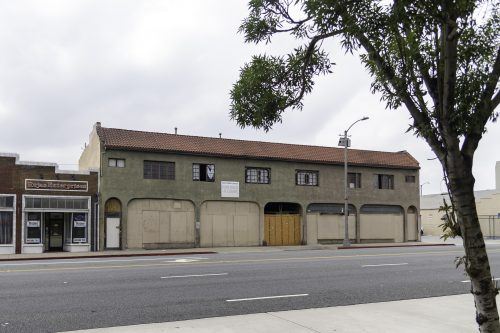 The building on the land acquired by the University of La Verne in Ontario could house the new College of Health or the Randall Lewis Center for Innovation and Entrepreneurship. The site is located at 214 E. Holt Blvd. in Ontario, less than a mile from the site of the ULV College of Law. / photo by Darcelle Jones-Wesley

The University of La Verne and the city of Ontario are negotiating property exchanges that could allow the University to expand its Ontario presence via the new college of health and possibly other programs.

University spokesman Rod Leveque said that the details of this plan are still pending.

“If it looks like it is going to work out, then we would want to have some meaningful discussions with the University community, with faculty, with students about plans for how to best use that space,” Leveque said.

Leveque said that the newly acquired property could become the home for the new College of Health or the new Randall Lewis Center for Innovation and Entrepreneurship, but everything is still preliminary.

Leveque said the negotiation involves possibly giving the city a portion of the College of Law’s parking lot at 320 E D Street for the current building and land at 214 E. Holt Boulevard.

Leveque said the acquisition would not be immediate, but would go through a “medium to long-term planning.” process.

Ontario is interested in the Law School lot to expand its adjacent civic center complex, Leveque said, adding that the idea came from the city, but the University needs the additional space for the College of Health and other growth, Leveque said.

“It would be exciting to be a part of the renaissance and renovation that is happening in the downtown Ontario area,” Leveque said.

To fund new buildings in the Ontario space, Leveque said, the University might be eligible for federal redevelopment grants, and will also seek private donations.

“The Ontario location does present possible funding opportunities that may not exist for similar expansion in La Verne,” Leveque said.

Paul Alvarez, professor of kinesiology and president of the faculty senate, said he appreciated the University communicating this potential Ontario expansion early in the negotiation process.

Alvarez added that resources are thin, whether they be faculty, lab space or classrooms.

“Anytime we have an opportunity to expand our physical plant, like athletics moving down to Campus West or the law school that’s (in Ontario), two things happen,” Alvarez said. “No. 1, it certainly gives us an opportunity to move into new or newly renovated spaces, that’s always nice. No. 2, on this campus we are able to say, ‘Oh OK this program moved out and now we have space to move into.’”

Alvarez noted that the Hoover Building used to be the Law School and now it hosts behavioral science offices and classrooms.

Alvarez said that the programs that could be housed in the new College of Health Ontario center might include the master’s program in athletic training, with other health programs, and psychology.

“Presumably, it will be graduate programs as opposed to entire departments moving over there, but in either case it is a great opportunity for us,” Alvarez said.