By Lindsey Pacela, Litsy Tellez on October 1, 2021 in LV Life 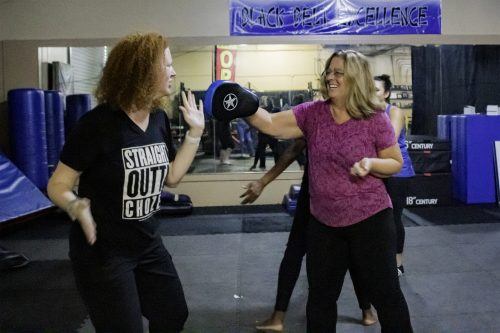 Students Murphy Dailey and Joy Brown participate in a women’s self-defense class Saturday at Chozen Martial Arts Academy in La Verne. Though the course was based on self defense, it also adressed self care, self worth and self preservation. / photo by Litsy Tellez

The Chozen Martial Arts Academy in La Verne hosted class two of four for women’s self defense designed for women 13 years old and older on Saturday.

Instructor Philipp Lomboy, also a father of four, brought out his white board and made a pyramid diagram of the self, which led to self defense at the top.

The course was based on self defense, and it also addressed self protection, self care and self worth.

He asked what running, hiding and fighting meant to the women of the class and explained how self defense was not just a physical, but a mental test as well to each individual who used it.

He began to warm up the class with basic techniques, such as avoiding shoulder taps with a partner to work up the agility of the body and mind, but made it clear that if a student felt uncomfortable, they could stop at any time.

“This will be a reality in self defense,” Lomboy said, referring to being touched as each partner slowly but surely was tapped by their partner while trying to avoid it.

The class moved on to knee-tapping, using the momentum of their bodies to drive each hit into their partner, using kick pads for protection.

As the women became more comfortable with their partners and the class, they began to communicate with each other and be more vocal with each punch, kick and hit. The class peaked at its most dangerous technique, the knockout shot. Lomboy asked a student to come up to the front and explained how using a simple distraction, like a strange question, was a perfect example of how to make the hit have more impact.

“Do you like lasagna?” Lomboy screamed, before demonstrating his knockout shot to the class, hitting the punching pad held up by the student to her lower ear.

“It doesn’t have to be the perfect shot, just a good one,” Lomboy said, encouraging the women to keep trying.

“Do you know my brother?” Joy Brown, an educator and mom yelled out, while lining up her swing on her partner.

“I had always wanted to take a defense class, and then my friend one day gave me the flier for this place,” Brown said, she was even considering joining the gym on a membership. Learning how to defend herself, having the skills to react and training muscle memory was why she loved it so much.

“Is it taco Tuesday?” Murphy Dailey, a project manager and mother shouted, before landing her hardest knockout shot. Dailey disclosed that she had been previously assaulted at a park six years ago.

“I liked what Philipp said about self worth earlier. It really does come down to realizing that you are worth protecting,” Dailey said.

She began taking karate classes with her daughter a year ago and had since moved up two levels to yellow belt. It gave them a goal and intention, unlike a typical gym where it was rep after rep. They both plan to someday reach the highest level, a black belt.

“Do you know who won the lotto?” Diana Atkinson, a health care worker, yelled at her partner before landing a forceful knockout shot.

Atkinson had begun taking krav maga classes with her daughter and had seen the defense class and decided to join. She liked learning how to respond appropriately to the situation at-hand and learning the skills of what to do.

The class practiced yelling out random questions at their attacker before swiftly hitting their target with as much force as they could, palm out and body turned for peak rotation.

“I’m not a fan of kicking because you want both feet ready to run when needed, however knees are great,” Lomboy said.

He demonstrated grabbing a shoulder of his attacker, pulling them in, and kneeing them as hard as possible in the groin; he called it the panini technique because it compressed everything together and quickly.

To finish the class, the instructor had the students combine all the techniques they had learned, coming at them with padded protection and yelling commands of where to hit next when needed. All of the women put their full energy into the final round and some even borderline hurt Lomboy through the padding he used.