By Darcelle Jones-Wesley, David Rafael Gonzalez on October 8, 2021 in News 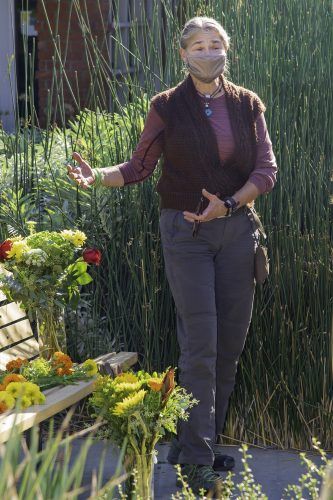 Felicia Beardsley, professor of anthropology, delivers introductions of speakers at an event in memory of former Professor of Anthropology Kim Martin on Friday at the xeriscape garden between Woody Hall and the Hoover Building. Martin is honored with a plaque on a bench in the garden. / photo by Darcelle Jones-Wesley

Members of the La Verne community gathered in the xeriscape drought tolerant garden between Hoover Building and Woody Hall to dedicate a plaque and bench in honor of the late Dr. Kim Martin, former professor of anthropology, who died in 2019.

The gathering was small with about 15 people in attendance, including several faculty who knew her well. The plaque was installed on the bench over the Summer while the University of La Verne was still remote, said Felicia Beardsley, professor of anthropology.

Beardsley urged those in attendance to honor Dr. Martin in their own way.

“All we ask is that you remember Kim in your own way, in your own time, whether it’s sitting on the bench or walking through the garden,” Beardsley said.

Wagoner said that she remembers Dr. Martin by her commitment to social justice, her interdisciplinary spirit and her passions, which all benefited the community.

“Kim brought her genuine authentic self with her every day: her excitement, her struggles, her questions, her frustrations and her passions,” Wagoner said.

Wagoner said that Dr. Martin was heavily involved in the community and actively helped shape the nature of the community.

“I miss her waves of energy that communicated her love and care for this palace, its people and its students that we serve,” Wagoner said. “I miss her presence, her vibrant energy, especially because she was just so present.”

Wagoner said that benches are places to rest and to ground and recenter oneself. She said she is reminded of a quote from Maya Angelou in which Angelou describes a park bench as a place to withdraw from one’s cares.

“I love that we are dedicating a bench in her memory, it means her presence and her significance in our community will continue and that it matters,” Wagoner said. “In Kim’s memory, this bench is an invitation to withdraw from the cares that do not withdraw from us.”

Wagoner said that the image of a bench fits because Dr. Martin herself carried many cares and burdens.

Davis, professor of sociology, described Dr. Martin as intellectually gifted, a mentor and a role model to many.

Davis said that Dr. Martin was an excellent travel companion and traveled all over the world as a colleague and friend.

“Fearless and undaunted, Kim was the driver and I the navigator on these adventures,” Davis said. “We lost hubcaps, side mirrors, our direction and our dignity regularly.”

Davis said that Dr. Martin helped design the xeriscape garden and decided where each flower and plant would be planted. Dr. Martin would often come to the garden just to clear her head, Davis said.

“Knowing that she was here and loved this garden and left this garden for us makes me feel a little closer to her,” Davis said. “When I come out here, it reminds me of her generous and giving spirit that I just love so much.”

Davis said that Dr. Martin was a champion of human rights and civil rights. She said that despite being intense and controversial, Dr. Martin never lost her humanity, fairness and generous spirit.

“She left her mark on all of us: her students, her colleagues and her friends,” Davis said. “And today we remember and honor her in this sacred garden she helped to preserve and a bench she sat on often, contemplating life and seeking internal balance and peace.”

Beardsley said that she would not be here if Dr. Martin had not started the anthropology department. She said that he periodically sits on the benches in the garden to remember Dr. Martin because it was a place she was in often.

The gathering ended with a sage blessing and smudging by Dan Kennan, adjunct faculty in the sociology and anthropology department.