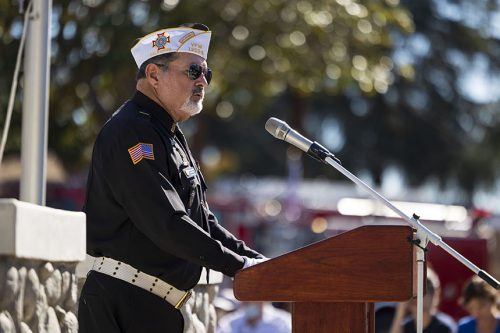 Daniel Lopez, La Verne Veterans of Foreign Wars Post 12034 “Band of Brothers” commander, speaks to a large crowd at the La Verne Veterans Memorial at the annual Veterans Day ceremony on Nov. 11. Veterans from all six branches of the United States Armed Forces were recognized, and several veterans were in attendance. / photo by Brady Keegan

The city of La Verne and its Veterans Hall held an outdoor event to honor veterans and their families on Veterans Day, Nov. 11.

Mayor Tim Hepburn with council members Robin Carder and Rick Crosby were present among a crowd of over 50, including military families, veterans and community members.

“This memorial was envisioned so veterans could connect with one another (and) each generation of the community could learn about the efforts and sacrifices of those who came before them and those who would follow,” Hepburn said.

The event started with the Pledge of Allegiance and a performance of the National Anthem.

Commander Daniel Lopez of the Veterans of Foreign Wars Post 12034 color guard was event host, and he handed out certificates to members of the Boy Scouts for their community projects.

With the help of the Boy Scouts, Lopez presented and raised seven flags – for all branches of the U.S. military.

One flag, the Prisoners of War flag, was created to honor U.S. personnel missing or unaccounted for from the Vietnam War.

“(This) has incredible meaning to all of us that have served,” Lopez said as he fought back tears.

“The adoption of the POW/MIA flag is a commitment to resolve as fully as possible the fates of Americans still prisoners of war or missing,” Lopez said. “Today the POW/MIA flag honors the more than 81,700 men and women taken prisoner and or missing in action from all of America’s wars.”

He also presented the newest flag for the U.S. defense – the Space Force flag.

Pastor Lincoln Dial of Calvary Baptist Church in La Verne, a University of La Verne alumnus, ended the ceremony with a closing prayer.

Attending the event was Karl Bauer, Army veteran, who served in the Vietnam War as an engineer from 1966 to 1968.

Bauer also served as a member of the honor guard, whose primary purpose is to attend ceremonies for deceased veterans and perform a ceremony consisting of the folding and presentation of the U.S. flag to the deceased’s family members.

“It’s nice to be honored because when we came back from the war we weren’t honored,” Bauer said.

Carla Dial, Pastor Dial’s wife and University of La Verne alumna, said she decided to come out to support her husband and her friend whose husband was a veteran and died last year.

“They’ve done so much for our country to make sure that we are a free country,” Dial said.

Diana Towles, veteran student success coordinator for the University, said the city has a great program that supports veterans.

Towles added that the University center also supports veteran students with peer-to-peer mentoring, access to food and assistance and more.

“We generally provide a place for a sense of belonging where they can meet,” Towles said. “Often as they start talking they … help each other,” she said.

She said veterans often struggle to transition back into civilian life after leaving the military.

“The military is a different culture, so being able to have a safe place to have support with that is really important,” she added

This University’s updated academic calendar this year honored Veterans Day with a day off for students and employees.