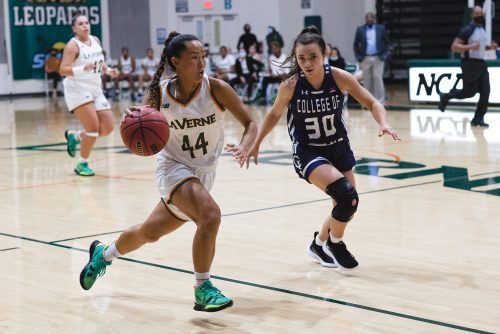 La Verne senior guard Alyssa Ono (44) drives the ball past Idaho freshman guard Taryn Riley (30) in the Leopards’ match-up against the College of Idaho Yotes Nov. 11 at the Frantz Athletic Court. The Leopards rallied from a deficit but lost, 87-77, in their season opener. / photo by Jingyao Liang

“It’s our goal every game to score 100 points and for us to reach that goal so early in the season, it’s an amazing feeling,” senior point guard Jazzlyn Johnson said.

When the Leopards got the first possession of the game, Johnson dished a three-pointer with no coverage to start the offensive onslaught.

Early in the first quarter SAGU freshman Deja Roberts stole the ball from La Verne senior guard Alyssa Ono when she tried to pass the ball to Johnson.

Johnson ran after Roberts and forced the ball out of Roberts’ hands. The quick steal by Johnson  gave sophomore shooting guard Casey Kuramoto a chance to score her first three-pointer of the night.

Johnson said she knew she had to step up and make an electric play early in the game.

“It was really about hustling and having heart,” Johnson said. “I knew to get to where we wanted as a team and reach our goal of scoring 100, I had to give everything I could in front of my teammates to motivate them to be the best players they could be.”

The Leopards’ maintained a lead on SAGU throughout the first quarter, 19-6. 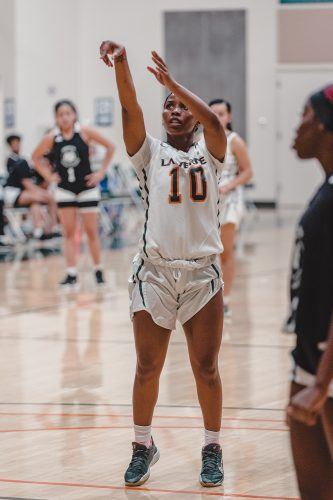 Freshman guard Naomi Jackson (10) shoots for a free throw in hopes to add to La Verne’s aggressive lead against SAGU American Indian College on Saturday at the Frantz Athletic Court. The Leopards were hungry for a win and defeated the Warriors, 106-59. / photo by William Hardy

Kuramoto said her role as a starter for the first time influenced how she viewed the game.

“Being a part of the starting five, we have to set a good example and get everyone hyped up to go into the game by having that lead for the bench players,” Kuramoto said. “We want them to feel like it is a little easier for them to do their jobs and feel less pressure.”

During the last two minutes of the first quarter, SAGU started to close the gap on the score by scoring seven points in a row.

SAGU’s rebounds and second-chance layups allowed them to score consistently to close the gap to 24-15.

In the beginning of the second quarter, Ono stole the ball from SAGU and passed to Kuramoto, who shot a quick three-pointer.

During the second quarter, the Leopards stayed aggressive in their style of play to prevent SAGU from scoring consecutive points on their defense.

La Verne fought for 72 offensive and defensive rebounds throughout the game and came up with 16 during the second quarter.

“We have been practicing getting rebounds more during practice because we did struggle when we played College of Idaho,” Kuramoto said. “Since we aren’t as tall this year, it’s more about focusing on the rebounds to get them out to a shooter or getting a defensive rebound to push the ball right away.”

The Leopards went into the half leading, 45-34.

In the third quarter, Kuramoto’s two three-pointers and Ono’s quick steal leading to a layup pushed the Leopards’ lead to 53-36.

The Leopards switched their gears and started executing layups, grabbing offensive and defensive rebounds up and down the court.

Freshman guard Naomi Jackson came off the bench hot and scored her first three-pointer within a minute of playing.

During the last two minutes of the third quarter, freshman shooting guard Marissa Howell executed two three-pointers from the left side and the right side of the court with no SAGU player in sight.

When there was less than two minutes left in the fourth quarter, Howell ran around the court to the right side to catch the ball and with Jackson’s block, Howell splashed another three-pointer through the net.

Howell bumped the Leopards’ score to 100-56 and helped the team reach its goal.

“This is my first time I have ever played with a team who scored 100 points in a game,” Howell said. “It was exciting being the one to make the score go up to 100.”

After Howell missed her shot, the crowd thought the game was over with nine seconds left on the clock. But Jackson’s offensive rebound handed Howell another chance to shoot a three-pointer.

Howell banked the last shot securing her 11th three-pointer for the night, tying the La Verne record set by guard Bailey Kurahashi in 2018.

“For her to be a freshman and for this to happen so early in the season, we are really excited for her because she can definitely break that record,” Johnson said.

The Leopards won, 106-59, and held SAGU to only seven points during the last quarter of the game.

The team will continue its non-conference schedule at 6 p.m. Nov. 26 when it hosts Antelope Valley at Frantz Athletic Court. 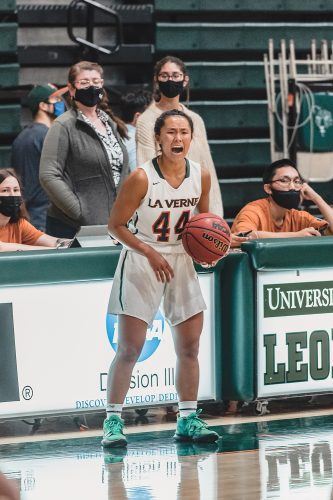 Senior guard Alyssa Ono (44) yells out a play for her teammates from the side court in the Leopards’ match-up against SAGU American Indian College on Saturday at the Frantz Athletic Court. The Leopards came out on top, 106-59. / photo by William Hardy