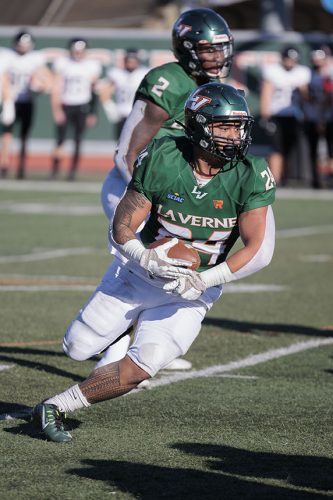 Freshman running back Ezra Tom Hoon (24) takes the handoff from senior quarterback Tyrone Williams Jr. (2) to rush the ball for a touchdown attempt against the Chapman Panthers on Saturday at Ortmayer Stadium. The Leopards were on top but then fell to the Panthers, 35-32, in their last game of the season. They ended the year with a record of 3-6. / photo by Brady Keegan

The Leopards football team lost a close one to the Chapman Panthers, 35-32, in their last game of the season at Ortmayer Stadium on senior day Saturday.

The Leopards finished their season with a final record of 2-4 in Southern California Intercollegiate Conference play and 3-6 overall. They finished sixth, just ahead of last place Whittier.

“In week two when we played them the score (59-25) made it seem like they were extremely better than us,” senior wide receiver Nate Sagastume said. “But we knew that we could hold our own against Chapman.”

On the initial kickoff, the Panthers received the ball and quickly found themselves on the Leopards’ 44 yard line. After a couple of quick first downs, senior quarterback Reed Vettel connected with senior wide receiver Trevor Vill in the end zone. The successful extra point made the score 7-0.

On the Leopards’ first drive of the game, they started on their own 25-yard line. Senior quarterback Tyrone Williams Jr. stuck to the passing game, completing three out of six attempts. After a sack on Williams by Chapman sophomore linebacker Kade Jordan and an incompletion on fourth and long, the Leopards turned the ball over on downs.

The Leopards’ defense began to amp up with an interception by senior linebacker JaVontay Hill, who returned the ball 23 yards.

“We just wanted to win, no matter how we did it, and send the seniors away with a smile, something we’ve never done before,” Hill said.

On the next drive, the Panthers mirrored the Leopards’ defense and got revenge as senior linebacker Jade Dural intercepted Williams for a 10-yard return.

For the rest of the first quarter, neither team could capitalize and the score remained 7-0.

After a brief unsuccessful drive from the Leopards, the Panthers pushed down the field only to obtain a field goal attempt. Junior Ken Baierl’s 35-yard try was wide and the score remained 7-0.

With six minutes left in the half, the Leopards mixed rushing and passing plays to establish themselves on Chapman’s one yard line. Williams rushed toward the goal line and the Leopards gained their first touchdown of the game. The successful extra point by freshman kicker Kapena Kamakawiwoole tied the score, 7-7.

“As far as offense, we know that Chapman likes to stack the ball and blitz, “ Williams said. “So our play was to get the ball out and I thought we did a really good job of that.”

At the two minute warning before half, the Panthers had possession. As they pushed down the field the Panthers entered the red zone and Vettel made a 20-yard pass to senior wide receiver Nico Ragas for a last minute touchdown to go into halftime leading, 14-7.

The Leopards took possession in the third quarter and began to wake up. With 10 plays and 42 yards, Williams rushed into the end zone from the 2-yard line to tie the game again, 14-14. After a failed drive by the Panthers, the Leopards gained the upper hand when Williams completed a 32-yard pass into the arms of freshman wide receiver Makena Ramos Kamaka to put the Leopards on top, 21-14.

The Leopards held the Panthers to no points for the rest of the quarter and stayed on fire entering the fourth quarter. A field goal by Kamakawiwoole extended the Leopards lead to 24-14.

Soon after, the Panthers regained momentum and put up another touchdown, closing the deficit. Their defense stopped the Leopards’ next drive and continued to push offensively scoring another touchdown, advancing the score to 35-24.

With a minute left, the Leopards receive the ball with the objective to put some final points on the board.

Kamakawiwoole said he is excited for next season.

“We are a very young team and that is something we talked about a lot,” Kamakawiwoole said. “We have many starters coming back so we have high expectations for next year.”