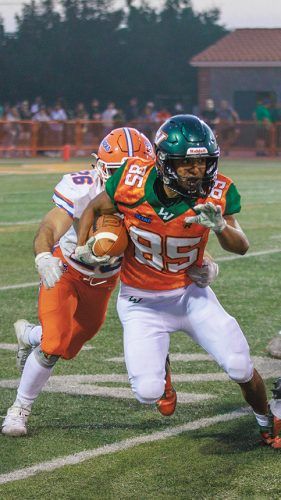 La Verne senior wide receiver Jacob Barriga (85) breaks through the Pomona-Pitzer Sagehen defense with defensive back Miles Mouradian (26) trailing behind in La Verne’s Homecoming game Saturday at Ortmayer Stadium. A late touchdown and two-point conversion pushed the Leopards to the win, 38-37. The Leopards will carry the momentum into their final game of the season against Chapman on Saturday at Ortmayer Stadium. / photo by Jingyao Liang

The football team came back in the last seconds of the fourth quarter to win the Homecoming game against the Pomona-Pitzer Sagehens in front of a packed crowd of alumni and supporters Saturday at Ortmayer Stadium, 38-37.

With less than a minute on the clock and the Sagehens up by 7, La Verne sophomore quarterback Miguel Aguero Jr. threw a quick pass to the right corner of the end zone for senior wide receiver Nathaniel Sagastume, bringing the score to 37-36.

“I knew that when I scored I was still down by one so the game wasn’t over yet,” Sagastume said. “We had to stay locked in. We couldn’t celebrate too early.”

The Leopards went for two and Aguero hit freshman running back Abel Cueva in the end zone to give La Verne the lead, 38-37.

Senior defensive lineman Khary Sanders said he kept telling his teammates to stay focused and be aggressive when Pomona-Pitzer was given the chance to win the game.

“In my head, I knew me or one of my teammates had to come up with a big play,” Sanders said.

With 19 seconds left for the Sagehens’ final drive, they tried to finish the game with a 46-yard field goal.

As the ball flew into the air, Sanders jumped to get his hand onto the ball for a block that sealed La Verne’s win.

“It was definitely a big feeling,” Sanders said. “After hearing the crowd go crazy, I was thinking to myself this is what we live for, this is how we make big stops and win games.”

The action packed final minute followed a close battle between the two teams.

In the beginning of the game, the Leopards moved the ball down the field until a penalty was called against the offense.

“Honestly I knew they would get open because I have the utmost trust in him,” Williams Jr. “I didn’t expect it to be a touchdown because we were going for the first down.”

The Sagehens then tied the game after junior running back Cole Barry rushed for a 5-yard touchdown.

The Leopards started the second quarter finishing their drive with a trick play where Williams Jr. handed the ball to freshman running back Kyle Bandy.

Bandy then tossed the ball to freshman Andre Maldonado who tossed an 8-yard touchdown to Williams Jr. to give the Leopards the lead, 14-7.

On the Sagehens first possession of the second quarter, Sanders broke up the senior quarterback Evan Flitz’s pass by tipping the ball into his own hands. It was Sanders’ first interception of the season.

“I told my coaches all week that I promised them that I would get one,” Sanders said. “When I got the interception, I was really excited for it.”

Sanders’ interception gave the Leopards’ offense the opportunity to score a 42-yard touchdown, bringing their lead up to 21-7.

La Verne’s defense forced Pomona-Pitzer to have incomplete passes and short runs for the remainder of the second quarter until Flitz threw an interception to senior linebacker Derek Guzman.

The Sagehens got another touchdown before the half, making the score 24-14.

The Sagehens started the third quarter ready to catch up to the Leopards.

Their two-minute drive ended with a touchdown and a two-point conversion, helping the Sagehens trail the Leopards by two points, 24-22.

The Leopards’ offense struggled to get points on the board throughout the third quarter and was shut down by the Sagehens’ defense.

“I think there were three or four drives that started with penalties that were 10-15 yards,” Williams Jr. said. “Once that happens, it’s hard to score.”

Near the end of the third quarter, the lead changed after Flitz ran to the right side of the field to complete a 10-yard touchdown pass, putting the Sagehens up, 29-24.

The fourth quarter was chaotic with the Leopards finally taking a 30-29 lead after a missed field goal attempt and two-point conversion.

The Sagehens took advantage of the opportunity to score a touchdown adding a two-point conversion to retake the lead, 37-30, and setting up La Verne’s last minute heroics.

“I was happy for the team mainly because these guys work so hard to come out with a win like that,” Sagastume said.

The Leopards will stay at Ortmayer Stadium for their last game of the season against Chapman at 1 p.m. Saturday as they celebrate Senior Day.

“It really hasn’t hit me yet that Saturday is my last game,” Sagastume said. “I know when the day comes I will feel all of the emotions.” 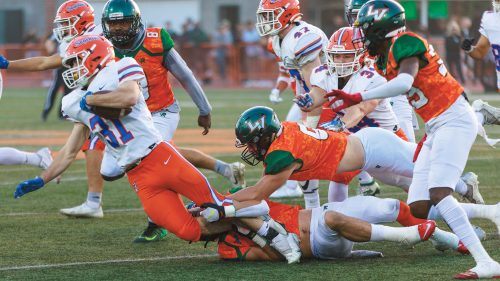