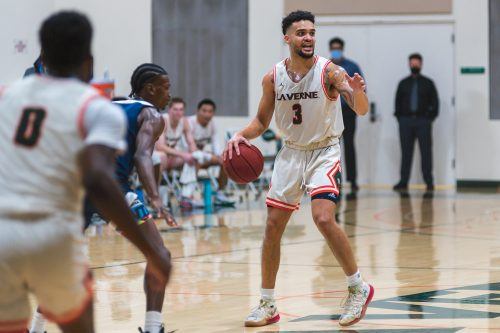 Sophomore guard Isaiah Knox looks for an open teammate to pass the ball to during the Leopards’ home opener against La Sierra on Saturday at Frantz Athletic Court. The Leopards fell to the Eagles, 79-57. They will travel to take on the University of San Diego on Wednesday. / photo by Darcelle Jones-Wesley

The men’s basketball team was overpowered by the La Sierra Eagles, 79-57, in their home opener Saturday at the Frantz Athletic Court.

“It was all about going out there and executing what we could,” freshman forward Austin Rapp said. “It didn’t go to plan so it’s just on to the next one.”

The Leopards won the tip off and they were full of energy.

Early in the game, a foul on Leopard junior guard Brad Yasukochi by Eagle senior guard Michael Morrissey gave the Leopards two free throw attempts. Yasukochi hit one to put La Verne on the board first.

Yasukochi fired back again by driving an Eagle defender into the paint for a layup, adding to the Leopards’ lead.

Defensively, the Leopards played aggressively. On an Eagle offensive drive, Morrissey attempted a shot off a rebound but Leopard senior guard John Malone II packed him for a turnover.

The Leopards were on fire as they led, 8-0, three minutes into the first half, forcing the Eagles into a time out.

The Eagles collected themselves and started connecting with the net. They began gaining on the Leopards, scoring six points, but shortly after, La Verne junior guard Paul Antonis drained a three-pointer, extending their lead to 11-6.

As the half progressed, the Eagles began taking off, tying the game 11-11 and they continued to push finding themselves up by seven points. On their defensive side, they held the Leopards from all of their scoring attempts. Seven minutes had passed since the Leopards had provided any points to the score, when junior guard Alex Blanco brought some life back to them.

A layup added two points to their score with a free throw attempt from a foul from Eagle junior forward Deandro Worrell given in the last play.

“It was the best way we could have come out,” Blanco said. “A lot of us haven’t played in almost 18 months.”

As time progressed, equal back and forth play from both teams advanced the score. The Eagles had a one point advantage, 20-19.

With five minutes remaining in the half, Yasukochi had possession in Leopards territory. While guarding off a defender, he passed the ball to sophomore forward Kyler Harvey at the top of the three point line, who then put the Leopards back on top, 22-20.

In the final minutes of the half, the Leopards began to slow down as the Eagles trampled over their defense. The Eagles scored eight straight points and the Leopards had nothing to offer, forcing them into a time out.

They could not wake up and would not put up any more points for the rest of the half. However, the Eagles scored six more points to end the half, 34-22.

In the start of the second half, the Leopards were inching their way back into a game, single points after another. Still, they could not slow down the Eagle’s offense as they hit their shots faster.

Back-to-back three-pointers from Antonis helped close the gap for the Leopards, yet they were still short.

Half way through the second half, the Leopards found themselves down 21 points and called for a time out. Heading back into the game, senior guard Isaiah Knox made a three point jump shot for the Leopards in hopes to build back momentum.

For the rest of the half the Leopards could not close the 20-point deficit of the Eagles. Unable to catch up, the final score stood at 79-57.

“We are not even in conference yet so this game was a big stepping stone for us to learn from what we did and capitalize from it,” Antonis said.

The Leopards’ non-conference schedule will continue as they host Life Pacific at 7 p.m. Friday at Frantz Athletic Court. They will open Southern California Intercollegiate Athletic play Dec. 1 on the road at Claremont-Mudd-Scripps.