Niki Elliott, co-director of the Center for Neurodiversity, Learning and Wellness, talked about the importance of heart-centered education and how educators can better serve their students with it at the weekly faculty lecture on Tuesday in the Executive Dining Room.

“A big part of our mission in the Center for  Neurodiversity is to educate teachers throughout the pre-K through 12 spectrum as well as college professors to understand what needs to happen in the heart and in the mind and the nervous system of learners in order for them to be prepared for the process of learning,” Elliott said.

Elliott said that over the past 30 years, research into trauma-informed teaching has given better insight on how to better serve non-traditional learners like students with learning diagnoses like autism, dyslexia and ADHD.

In the mid 1990s, the Centers for Disease Control and Prevention and Kaiser Permanente conducted a study called the Adverse Childhood Experiences study (ACEs), which is where the idea of trauma-informed teaching comes from. This study looked at things that could disrupt the learning process of learners, like trauma, neglect, illness and the death of a loved one. As a person’s ACE score increased, there was an increased risk of adopting high risk behaviors and impairment, cancer, diabetes, etc, Elliott said.

This study put into question what the educational needs are for people with higher ACE scores and how school and generational trauma could cause adverse childhood experiences, Elliott said.

Elliott said that other challenges students face are microaggressions and other forms of racism and whether or not a teacher likes the student.

“Unless a student has other aspects or points of resilience and support, emotional physical nervous system structural support, it does matter whether our educators like us,” Elliott said.

Elliott said that it is important to run a classroom as if a third of the classroom has had significant life experiences that have exposed them to trauma.

Elliott said that during her research, she realized that it was important to also pay attention to the educator’s ACE score. During a retreat with a group of educators, Elliott found that many had ACE scores higher than seven.

“What we found is that teachers who have a higher ACE score, because they have a strong need to feel in control, are more likely to have very authoritarian discipline styles with students,” Elliott said.

Elliott said that this research was grounded in Polyvagal Theory to help offer strategies for teachers to support students. Polyvagal Theory is based on three principles that shape how the nervous system interacts with itself while a person goes through life and learning.

The first principle is neuroception, which is the subconscious thoughts and is part of someone’s internal bias. The second principle is dissolution that involves someone’s fight or flight response to real or perceived threats and causes people to shut down. The final principle is co-regulation is the sending of signals that signify safety.

“As a teacher one needs to be concerned about your body and the nervous system so that if you’re not prepared to be sympathetic and loving and so forth to your students. then it will impair your ability to get your material across,” said Al Clark, professor of humanities.

Lauren Fittante, CNLW program coordinator, said that everyone comes to the classroom with different lived experiences that others are not aware of.

“Being a heart-centered educator is being a person of safety and, when she says love in action, someone that supports and sets the temperature of the classroom so that all students can learn no matter what they’ve been through,” Fittante said.

David Rafael Gonzalez is a senior journalism major and LV Life editor of the Campus Times. He has been a three-time editor-in-chief and has also served as editorial director, LV Life editor and a staff writer.

Speaker explains how SoCalGas is preparing for a sustainable future 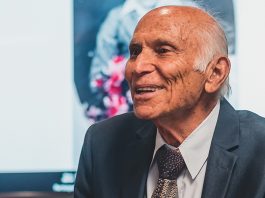 Ispahani recounts his life in economics and education 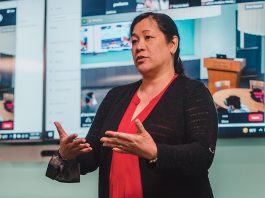